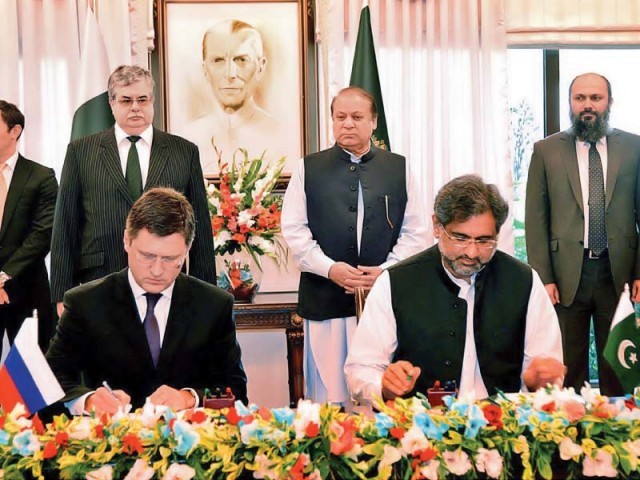 Pakistan and Russia signed a government-to-government deal on Friday to construct a pipeline to transport liquefied natural gas (LNG) from Karachi to Lahore. Moscow will lend Islamabad $2 billion for the project.

Russian President Vladimir Putin is likely to visit Pakistan within the next four months to perform the groundbreaking of the pipeline project, for which Prime Minister Nawaz Sharif had handed over the framework to the Russian president in Ufa earlier this year. Moscow had then sought some time to get a nod from its competent forum.

A senior government official said that Pakistan had formally invited Putin to visit Pakistan for the groundbreaking. Russian energy minister has also assured Islamabad of Putin’s visit, he added.

During the previous government, the Russian president was to visit Pakistan to sign the Iran-Pakistan gas pipeline financing deal but Islamabad only wanted to sign some memorandums of understanding (MoUs), which upset Russia. “Moscow wanted concrete agreements,” the official said. “Putin postponed his scheduled visit to Pakistan after this.”

While Pakistan and Russia have signed a defence cooperation deal earlier, this is first energy deal between the two countries after 30 years which shows the shift in Pakistan’s policy to attract investment to overcome its energy crisis.

In return, Islamabad will award the contract of laying the LNG pipeline to Russian firm RT Global Resources without going into the bidding process. The firm, which is a Russian State Corporation, will lay the 1,100-km-long pipeline with a capacity of 12.4 billion cubic metres (bcm) per annum to connect LNG terminals in Karachi with those in Lahore.

Pakistan has worked on a similar model with China under which a Chinese firm would lay the Gwadar LNG pipeline to Nawabshah and build an LNG terminal at the deep-sea port at a cost of $2.5 billion.

The financing for the LNG pipeline comes as a prelude to Russia’s offer to sell LNG to Pakistan. Russia is the second-largest producer of natural gas in the world, and is seeking to diversify its export markets after a spat over Ukraine last year with the European Union, its main buyer.

Inter State Gas Systems (ISGS) Managing Director (MD) Mobin Saulat told The Express Tribune that the government was targeting signing the commercial agreement in the next three to four months. A bid document is being prepared to be given to the Russian firm. He added the pipeline would be laid on Build, Operate and Transfer (BOT) basis. The Russian company would transfer it to Pakistan after 25 years.

Under the agreement, Pakistan would provide 15 per cent equity whereas 85 per cent funding would be provided by the Russian firm. The first phase of the project is expected to conclude by December 2017.

PM Nawaz later met a Russian delegation led by Energy Minister Novak at the PM House, hailing the growing cooperation between the two countries as a great step in fulfilling Pakistan’s energy requirements.

Both sides reviewed the overall state of bilateral energy cooperation, the possibility of greater Russian investment in Pakistan’s oil and gas sector and exchanged views on the Karachi-Lahore gas pipeline.

The Russian energy minister expressed the hope that his visit would pave the way for intensive energy cooperation between the two countries.