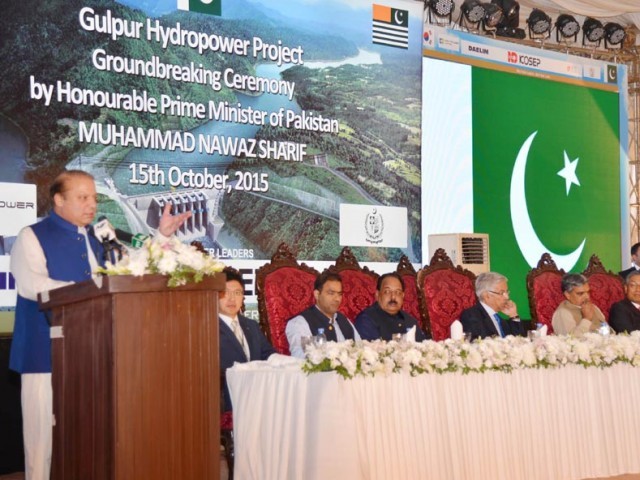 Prime Minister Nawaz Sharif has advised the leadership of Pakistan Tehreek-e-Insaf (PTI) to show political maturity and accept the results of recently held by-polls in Punjab.

“I invite those people, who are trying to pull our legs, to come and contribute in the development of Pakistan,” PM Nawaz said in a veiled jibe at PTI chief Imran Khan.

Addressing a gathering at Kotli, Azad Kashmir, where the prime minister laid down foundation stone for 102 megawatt Gulpur Hydel Power Project, Nawaz confessed that his party had erroneously issued the party ticket to a wrong candidate but said the PTI’s candidate still lost in the Okara by-poll.

“We accepted your demand of re-elections but you are still not accepting the results,” PM Nawaz said, adding the results of Punjab by-polls were rejected within just 48 hours.

The premier went on to add that while the PML-N government was aiding the country’s development, there were others who were putting hurdles in the way of the country’s progress.

Further, PM Nawaz once again reiterated his commitment to resolve the energy crisis, claiming that power outages would end well before his government’s tenure. “By the end of 2017 or at the start of 2018 load-shedding in this country will be gone forever.”

The prime minister went on to say that the current government was not only trying to address the issue or power load-shedding but also looking into produce electricity at cheaper rates. “It is our government’s top priority to make electricity available at cheaper rates to farmers and LNG, coal and water-based power projects will help produce cheap electricity.”

The premier further claimed that 33 per cent work has already been done on the Gulpur power project, adding that the project is the manifestation of the interest and trust of foreign investor in Pakistan.

“We are working on a number of small power projects in the area as well as some mega projects down the Indus cascade,” he said.