US to raise Iranian missile test at UN Security Council

US to raise Iranian missile test at UN Security Council 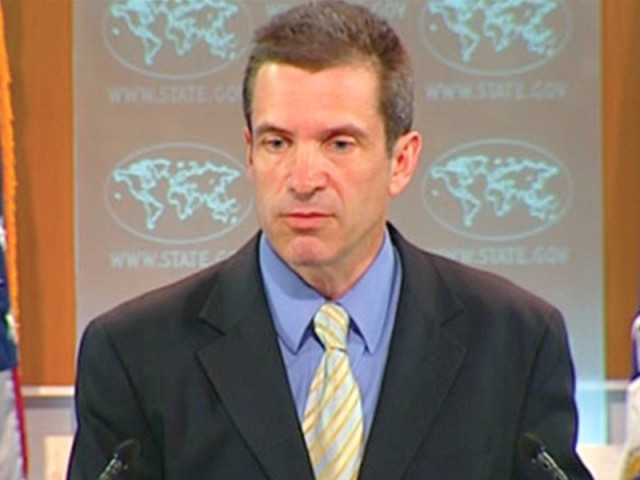 WASHINGTON: A missile test announced by Iran over the weekend was an apparent violation of a UN Security Council resolution and Washington will raise the incident at the United Nations, the US State Department said on Tuesday.

Iran said it tested a new precision-guided ballistic missile on Sunday, signalling an apparent advance in Iranian attempts to improve the accuracy of its missile arsenal.

“We’ll obviously raise this at the UNSC as we have done in previous launches,” State Department spokesperson Mark Toner told reporters, noting the test appeared to be a violation of UN Security resolution 1929.

He and White House spokesperson Josh Earnest both said the issue was separate from a deal Iran struck in July with six world powers, which seeks to curb Tehran’s atomic program in return for having sanctions against it eased.

Ballistic missile tests by Iran are banned under Security Council resolution 1929, which dates from 2010 and remains valid until the July 14 nuclear deal goes into effect.

Once the deal takes effect, Iran will still be “called upon” not to undertake any ballistic missiles work designed to deliver nuclear weapons for a period of up to eight years, according to a Security Council resolution adopted in July.

The resolution says that when the deal is in effect countries will be allowed to transfer missile technology and heavy weapons to Iran on a case-by-case basis with council approval.

However, at the time the resolution was drafted, a US official called this provision meaningless and said the United States would veto any suggested transfer of missile technology to Iran.

Speaking on Tuesday, White House spokesman Earnest made clear countries could more to stop the flow of ballistic missile technology to Iran.

“That is work that requires international cooperation,” he said, adding that Washington was ready to work with Gulf allies to counter Iran’s ballistic missile program.

Iran state television showed on Sunday what it said was a successful launch of the new Iranian missile, named Emad, which appears to be Tehran’s first precision-guided weapon with the range to strike its regional enemy Israel.

Britain’s UN Ambassador Matthew Rycroft told reporters in New York that “the existing (sanctions) architecture remains in place” for the time being, adding that the council’s Iran sanctions committee should look into the incident.