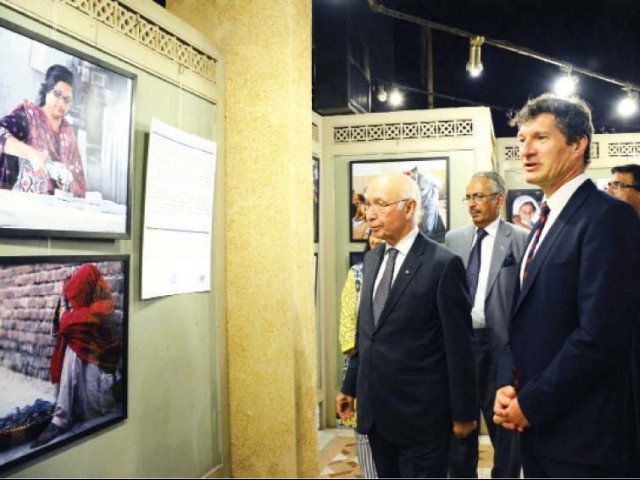 The exhibition featured the UN’s work in the country in areas such as humanitarian assistance, peacekeeping and gender issues was displayed. PHOTO: HUMA CHOUDHARY/EXPRESS

ISLAMABAD: Over the last 70 years, the United Nations (UN) has made the world safer, healthier and richer. This was the theme of the inauguration of the festival ‘United Nations 70: Partnering for people’s development’, celebrating the world body’s anniversary at Lok Virsa on Monday.

“The discussion of ‘global goals’ at the General Assembly recently showed that the UN still has the vision to make the world and Pakistan better for everyone,” said the event’s host Waqas Rafique.

“Over the next few weeks, the UN will be exploring some of the themes that make it so important for Pakistan, including values, youth, climate change and regional stability,” he added.

Rafique opened the event and welcomed the diplomatic community and the guests.

Expressing appreciation for hosting the event at Lok Virsa, executive director Dr Fouzia Saeed said the space was a people’s platform, which is in line with the UN’s ideology.

“The UN is also a people’s platform that works towards bringing people and nations together. I particularly appreciate the fact that the word ‘nations’ is a part of UN’s name and I believe the UN does not belong to any one country or any one government or power, but belongs to everyone and has brought together different nations for peace and development,” Saeed said.

She further highlighted the role of Lok Virsa as a cultural platform that deals with traditional heritage, encourages research and discourse and makes documentaries to promote culture.

“We practice and participate in things that bring people together and help dream of a better future. This is where our ideology overlaps with that of the UN,” she added.

UNDP Resident Representative Neil Buhne said the first three words of the United Nations preamble are “we, the people”, which signifies the body’s aim to bring people together and promote collectiveness.

“The UN is a framework that works towards holding people and nations together and believes in global goals”, he said.

“The UN’s impact on areas such as human rights as well as the social and economic development of mankind is very strong,” said Argentine Ambassador Rodolfo Martin-Saravia.

Prime Minister’s Adviser on National Security and Foreign Affairs Sartaj Aziz, the chief guest at the event, congratulated the UN on its anniversary and highlighted the role of Pakistani officials in UN missions.

“As many as 150,000 civilian and armed forces personnel from Pakistan have been involved in UN missions; 142 officials have sacrificed their lives to date,” Aziz said.

“Pakistan has contributed comprehensive work for the UN to counter the challenge of extremism. Over the years, Pakistan has benefited by the UN’s operations in various areas including but not restricted to health, education and population,” he added.

“Recently, the UN has shifted its attention from just environment to sustainable development, which is the real essence of environment,” Aziz added.

The Envoys band featuring Bosnian Japanese ambassadors performed at the inaugural event. They ended the musical performances by singing the patriotic anthem, ‘Dil Dil Pakistan’, to the delight of the audience.

The event was followed by a photography exhibition titled ‘Pakistani People and the UN’, featuring the UN’s work in the country in areas such as humanitarian assistance, peacekeeping and gender issues.