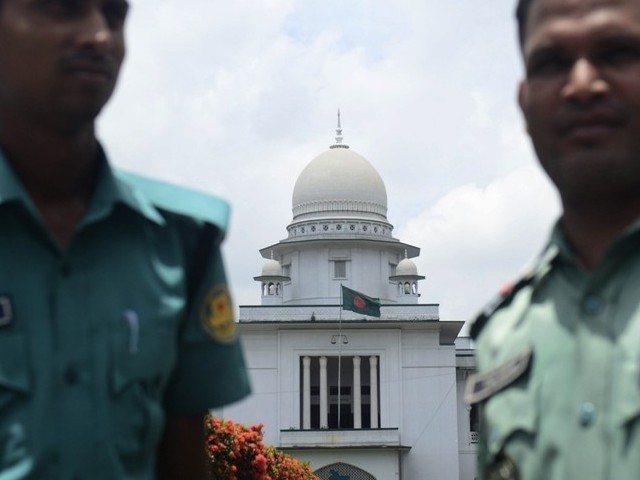 Bangladeshi police stand guard in front of the high court in Dhaka on August 1, 2013. PHOTO: AFP

DHAKA: A Japanese farmer shot dead by suspected extremists in Bangladesh was buried in a Muslim graveyard on Tuesday after a cleric testified that he had converted to Islam, officials said.

Hoshi Kunio was shot dead by three men on a motorbike who stopped his rickshaw on a dirt road last week, an attack later claimed by the Islamic State group.

The 66-year-old had settled in Bangladesh, where he had leased land to farm, and was living in the northern city of Rangpur.

His murder came just five days after an Italian aid worker, Cesare Tavella, was shot dead in similar fashion in the Bangladeshi capital Dhaka, an attack also claimed by the extremist group IS.

Priyasindhu Talukdar, a government official in Rangpur, said Kunio was buried in a Muslim graveyard, adding, “we got confirmation that he had converted to Islam before his death.”

“We held his funeral prayer and then buried him in the graveyard in accordance with Muslim rites. The Japanese embassy in Bangladesh approved the burial and two Japanese officials were present,” Talukdar told AFP.

Bangladesh prides itself on being a mainly moderate Muslim country. But the gruesome killings of a series of atheist bloggers this year have rocked the nation and sparked a crackdown on local hard-line militant groups.

Experts say militants pose a growing danger in Muslim-majority Bangladesh, warning that a long-running political crisis has radicalised opponents of the government.

However, experts have expressed scepticism about the IS claim of responsibility in the murders of Kunio and Tavella.