Sajeed Khan studie­s at UoP with aspira­tions to take up teachi­ng as career­
By Mahwish Qayyum
Published: October 12, 2015
Tweet Email 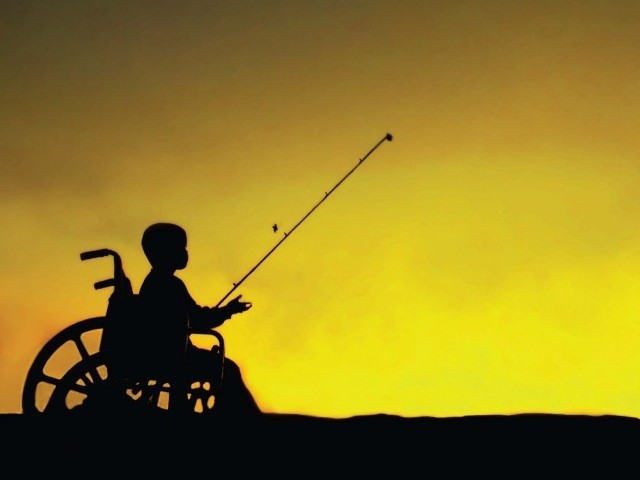 PESHAWAR: Sajeed Khan has transformed his weakness into his strength. Although the 20-year-old suffered paralysis in his leg by poliovirus, he has not shied away from his aspirations and is pursuing an MA in Urdu from University of Peshawar (UoP).

Speaking to The Express Tribune, Sajeed, a resident of Urmar Miana, said he was only a year old when he contracted the virus. From very early on, he had to come to grips with his medical condition.

“As a child, I would see children playing cricket in my village’s ground,” he said. “Cricket is my favorite sport and I envied them because I could not play with them.”

Over the years, he has come to terms with his condition and is no longer bogged down by perceptions of his disabilities. “I didn’t let the virus interfere with my dreams to get an education,” he said, with a broad smile.

According to Sajeed, his elder brother made a conscious choice to give up on his education and help his father with farming.

“However, my family had no such expectations of me as I could not help my father,” he said. “That’s why I decided to continue my studies. I am in my final year of university and plan to become a teacher.”

Sajeed said his parents had made consistent efforts to inoculate him when he was a child. “I don’t know how and why I contracted polio,” he said.

When contacted, Dr Raheem Khattak, the spokesperson for the Emergency Operation Center (EOC) for polio in K-P, said children who have been vaccinated against polio can, in rare cases, contract the crippling virus.

According to the World Health Organization website, “On rare occasions, if a population is seriously under-immunised, an excreted vaccine-virus can continue to circulate for an extended period of time. The longer it is allowed to survive, the more genetic changes it undergoes. In very rare instances, the vaccine-virus can genetically change into a form that can paralyse – this is what is known as a circulating vaccine-derived poliovirus (cVDPV).”