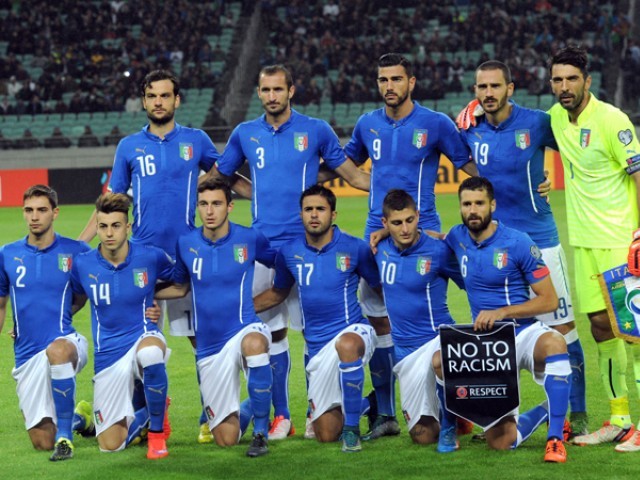 MILAN: Italy coach Antonio Conte applauded his deployment of a rarely-used tactical system that could provide the basis for his “little war machine” when the Azzurri head to Euro 2016 next summer.

Italy, the beaten finalists at Euro 2012, qualified for next summer’s showpiece in France thanks to a one-sided 3-1 win over Azerbaijan in Baku complete with goals from Eder, Stephan El Shaarawy and Matteo Darmian.

The win left Italy top of Group H with a two-point cushion on Norway ahead of the sides’ final qualifier in Rome.

Conte pledged his side would “honour” their final group fixture on Tuesday, which could give him another opportunity to test the 4-2-4 system deployed to such devastating effect against Robert Prosinecki’s men on Saturday.

It was previously used by Conte when he steered Bari then Siena to the league title in Serie B, and Sampdoria striker Eder is among the fans.

“It’s a system that is designed to get the ball forward to the front men,” said the Brazil-born forward, who gave Italy an 11th minute lead after running on to Marco Verratti’s superbly-timed long ball from midfield.

In 2009 Conte steered Bari into Serie A after winning Serie B and, two years later, repeated the feat with Siena, paving the way for him to join his former club, Juventus, as coach in 2011.

Although Conte went on to favour a 3-5-2 during three, scudetto-winning seasons at the Turin giants, his current position is offering more flexibility.

“In Baku, it wasn’t just the early goal I liked. We gradually began using a 4-2-4, a system that I used to win the league (Serie B) with Bari and Siena,” said the 46-year-old.

“I wanted to use it at Juventus, but we didn’t have the right kind of players for it, and here I’ve found them.”

Italy were far from imperious and defensive blunders allowed Azerbaijan to pull level on 31 minutes through Dmitri Nazarov, who pounced on Giorgio Chiellini’s mistake to leave Gianluigi Buffon flat-footed in the Italy goal.

El Shaarawy twice came close to restoring Italy’s lead in the immediate aftermath, firing just over with a looping drive and then sending another effort just wide of Kamran Agayev’s upright.

The Monaco forward eventually found the net when he tapped home into an empty net from Antonio Candreva’s generous pass after Graziano Pelle had sent the Lazio winger behind the hosts’ backline.

It was his first Italy goal since 2012 and he said: “I’ve been waiting a long time for this.”

Conte’s tactical system found another advocate in El Shaarawy, who added: “Eder, (Graziano) Pelle and myself linked up really well. I think that was obvious to see.”

Eder should have had his second goal just after the hour when he ran on to Mattia De Sciglio’s long pass from midfield to chip onrushing Agayev, only for Rashad Sadygov to rush back and clear the ball off the goalline.

Minutes later, Italy’s pressing up high had Azerbajian in trouble and when Darmian beat Nazarov to the ball the Manchester United defender controlled well on the edge of the area to beat a flat-footed Agayev with a superb snap shot.

“It’s great to score my first Italy goal,” Darmian said. “You could see by the way I hugged my teammates how emotional it was.”

Looking ahead to France 2016, Conte is aware Italy no longer instill fear as they used to. Last year, Cesare Prandelli’s Italy side failed to get past the first round of the World Cup for the second successive time.

But Conte said: “For France 2016 we’re not among the favourites, and I can’t tell you whether in Europe we’re among the top four, the top six or the top 18.

“But we’re hoping to build our own little war machine.”