Skippe­r feels batsme­n, pacers must also step up to the plate.
By Our Correspondent / AFP
Published: October 9, 2015
Tweet Email 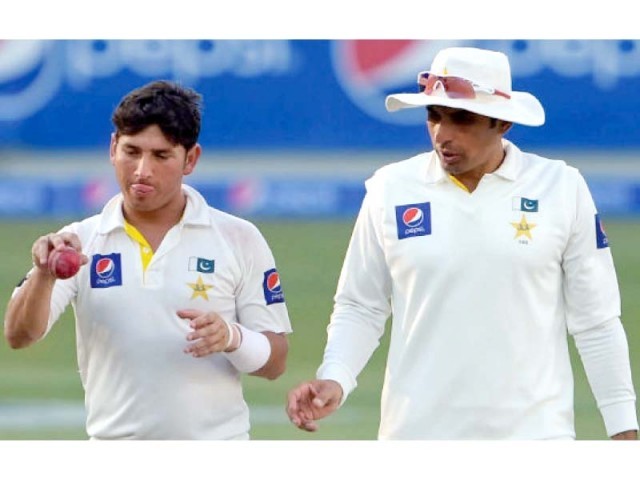 Misbah indicated that the England series may well be his last in international cricket as a series against India looks increasingly unlikely. PHOTO: AFP

KARACHI / ABU DHABI: Pakistan captain Misbahul Haq warned England on Thursday that rising leg-spinner Yasir Shah posed a “threat to every team” ahead of their three-Test series, but added his batsmen will have to be at their best against quality opposition bowling.

Pakistan hope Yasir and slow left-armer Zulfiqar Babar will be able to match the exploits of Saeed Ajmal and Abdul Rehman who shared 43 wickets between them in a 3-0 rout of England in 2012.

Asked whether Yasir would post as big a threat in the absence of Ajmal, who was not selected for the series due to a lack of form after remodelling his action, Misbah said: “The way he’s bowling he’s a threat to every team. Obviously England know that. But it’s not just him; all our bowlers have to play their roles and the batsmen must score consistently as well.”

Yasir has been leading Pakistan’s spin attack in Ajmal’s absence, taking 24 wickets in Pakistan’s last series in Sri Lanka and climbing to number three in the Test rankings.

Misbah praised his spinner but hoped his fast bowlers can also contribute. “We expect the fast bowling department to also play their roles by taking wickets with the new ball, especially in Abu Dhabi,” added the skipper.

The 41-year-old also said his batsmen need to counter England’s new spin twins Moeen Ali and Adil Rashid. “Ali has been bowling really well and did well against a team like India, that says a lot of his bowling strength,” said Misbah. “Again it’s not just the two spinners we have to respect but the others too. We need to deal with their seamers as well. They have some quality fast bowling.”

England’s pacers include world numbers two and five Stuart Broad and James Anderson, and are far stronger on paper than Pakistan’s pace department, which features Wahab Riaz and Junaid Khan.

He also hoped the return of Shoaib Malik — back after five years — will boost the team and give them an extra bowling option. “He’s playing really well and is in good form. He is here for his bowling as well and will be useful because England have four to five left-handers.”

Misbah’s sentiments that another 3-0 whitewash will not be easy were seconded by PCB Chairman Shaharyar Khan, who felt England will be better prepared to tackle Pakistan than what they were three years ago.Shaharyar, who is due to fly to the UAE for ICC meetings, stated that PCB officials will meet with Board of Cricket Control in India (BCCI) officials to discuss the possibility of a bilateral series but admitted that the series looks unlikely.

“At the moment we can say there is hardly any chance of a Pakistan-India series in December. The political situation isn’t great but we’ve said time and again that politics and sports shouldn’t be mixed,” said Shaharyar. “We will meet BCCI officials on the side to see if we can find a solution.”

Shaharyar also backed Shahid Afridi to remain T20 captain till the World T20 next year, stressing that no player will be forced to retire.

“Afridi will captain Pakistan in the World T20 because he was and is a match-winner,” said the chairman.