Together we can: ‘Students can help raise awareness about dengue’

Together we can: ‘Students can help raise awareness about dengue’ 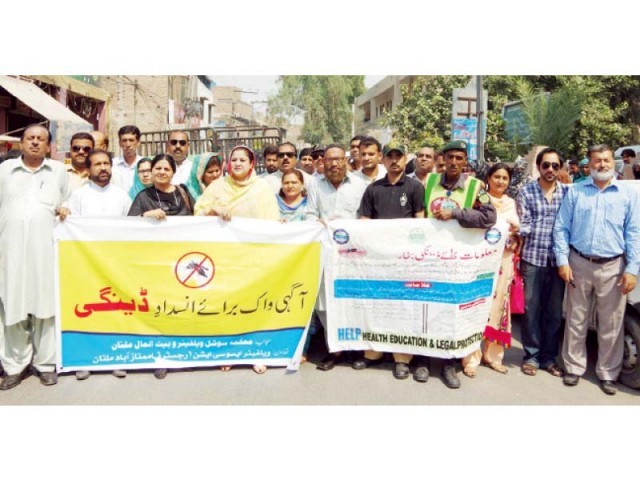 One of the best ways to raise awareness on how to prevent dengue fever is to educate the children at the 1,947 public schools in Bahawalpur district about the issue, Minister for Education, Youth and Tourism Affairs Rana Mashhood Ahmad Khan said on Monday.

He was addressing a meeting at the committee room of the Bahawalpur DCO’s office on the on-going Anti-Dengue Campaign in the province. “All relevant departments must play in an effective role in building a healthy society,” said Mashhood.

“Once you inform children about ways to prevent dengue fever, they will educate their parents and others about it at their homes…this is one of the best ways of raising awareness.” Mashhood also told them to distribute pamphlets and treatment information brochures among students and teachers.

He told Education Department officials to organise lectures on the issue for students in their ‘zero period’.

“Department officials and teachers should participate enthusiastically in the anti-dengue campaign.” The minister also directed the health EDO to invite elected public representatives to schools to address school councils.

Mashhood was also given a briefing regarding the anti-dengue campaign.

The health EDO said Bahawal Victoria Hospital’s dengue ward had four beds. He said other hospitals in the district had more than 100 beds for patients suffering from dengue fever. “If need be, we can call for more beds.”

On an unrelated note, Mashood told the DCO to work towards promoting tourism in Bahawalpur district. He stressed the need to preserve the heritage of Bahawalpur and make them interesting for the youth of today.

Islamia University Bahawalpur Vice Chancellor Qaiser Mushtaq said he was working on a project in cooperation with the department of Arts and History to preserve Bahawalpur’s historic sites.

Towards the end of the meeting, Cooperatives Minister Malik Iqbal Channar asked for the historic Government Girls Degree College to be restored. He also asked the minister to consider adding another building for the women’s university.

Adviser to Chief Minister on Health Khawaja Salman Rafique visited Rawalpindi on Monday and held a meeting to review the steps taken to control the dengue fever epidemic there.

He said government departments were making coordinated efforts to control the dengue outbreak in Rawalpindi. He urged citizens to cooperate with the government to make the anti-dengue campaign a success. “Start by removing any open containers of water at home.”

Rafique visited Fazal Town, phase-I, Saidpur Road, Khanna Road and Chungi 8 among other areas and inspected several junkyards and tyre shops. He said though government departments were working hard to bring the epidemic under control, their efforts wouldn’t amount to much if citizens did not participate enthusiastically in the campaign. He said the chief minister was monitoring the situation. He said government departments, schools and colleges have been organising awareness seminars and walks on the issue. He said pamphlets were being distributed and a zero period was being observed at schools and colleges to educate children in dengue fever prevention.

He said the government had also launched a publicity campaign in print and electronic media to sensitise people about dengue fever.