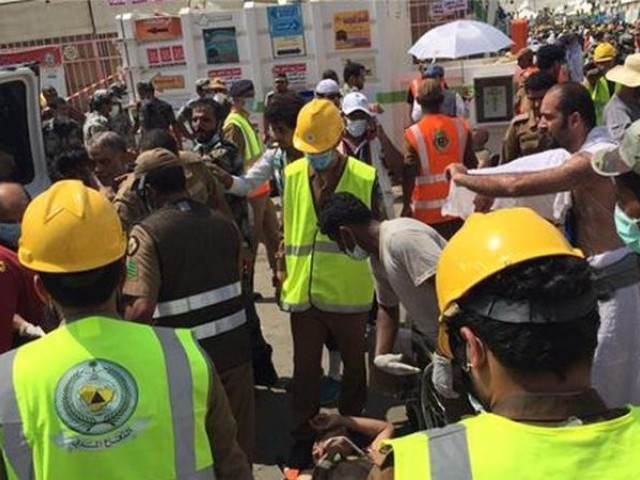 ISLAMABAD: The number of Pakistani pilgrims killed in the Mina stampede has risen to 57, the Ministry of Religious Affairs confirmed on Friday.

In a list published on its website, the ministry released the names and details of the 57 Pakistanis confirmed by Saudi authorities, officials and family members to have been killed. At least 49 Pakistanis were also injured in the stampede – the worst disaster to strike the annual Hajj pilgrimage in 25 years.

The list of 57 Pakistani pilgrims includes 26 pilgrims whose deaths have been officially verified by Saudi authorities, and 31 people whose deaths were reported by relatives and eyewitnesses.

Around 102 Pakistani pilgrims are still believed to be missing since the disaster.

Confirming the death toll, Minister for Religious Affairs Sardar Muhammad Yousuf said that 21 Pakistani pilgrims have been buried so far, while 12 injured are under treatment in different hospitals in Mina, Jeddah and Makkah Mukarma.

Yousuf said the ministry is engaged in collecting information regarding missing pilgrims.