Award show revert­s to former format of fluff wrappe­d in a bow of glitz and glamou­r but fails to leave a mark
By Hasan Ansari
Published: October 1, 2015
Tweet Email 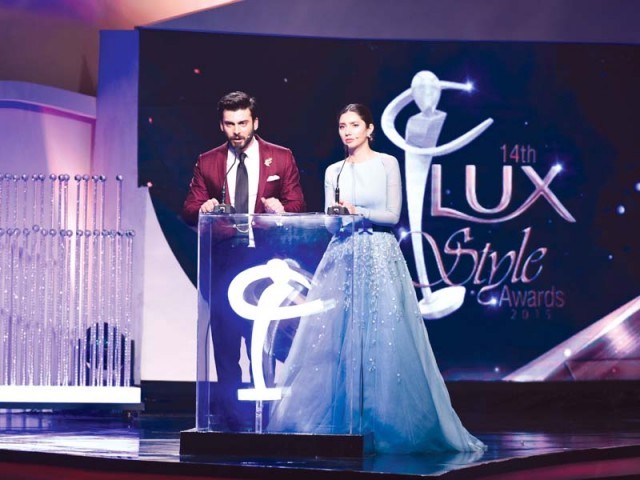 Fawad Khan and Mahira Khan hosts at the award ceremony.

For the past 14 years, the Lux Style Awards (LSA) seem to have been set in stone on Pakistan’s cultural calendar but the latest instalment may not bode well for its standing in the industry. After last year’s high tea-slash-award show, the LSAs reverted to a format they’re seemingly more at ease it with —  fluff wrapped in a bow of glitz and glamour.

But even a return to the familiar couldn’t mask the cracks that became more and more evident as the programme progressed. It’d be safe to say that the LSA’s were undermined by a cocktail they’ve oft-sipped from —  a bit of bad luck, individual errors and to make things worse, insufferable repetition.

14 years since the inception of the LSAs and the show still seems to be stuck in the past. Fixated on the idea of going retro, the ceremony was overpowered by a been-there-done-that feel. From Fawad Khan and Mahira Khan’s onstage entrance in a red car to the yesteryear tribute by 1990s film stars Noor, Resham, Meera and Moammar Rana, the show essentially was repetition of past editions.

Already late in embracing new-age cinema, local award shows have already been lagging behind in terms of the entertainment quotient, and the desire to constantly celebrate lost years of Pakistani cinema seems to be nothing short of an overused gimmick. The only good to come out of a tribute to Ali Zafar was that he gave a ‘well-rehearsed’ impromptu performance on Rockstar. PHOTOS: DRAGONFLY

During the weeks leading up to the LSAs, Fawad and Mahira’s reunion as hosts of the ceremony had become the talk of the town. But amid hype and publicity, the small screen’s star couple failed to live up to its name. Although signs of boredom became evident right at the beginning of the ceremony, it soon felt like their hosting gig bore resemblance to the James Franco-Anne Hathaway Oscars stint, lacking the punch that hosts such as Ellen DeGeneres are known for. From multiple fumbles to cringe-worthy jokes, the duo was unable to recreate the Humsafar magic.

If the LSAs worked how the Chinese calendar does, then 2013 would be the Year of Humsafar, 2014 the Year of No Award Ceremony and 2015 the Year of Urwa Hocane and Farhan Saeed. Not only is this so because the two are smitten with each other but also because Farhan bagged the ‘Song of the Year’ LSA for his song Roiyaan and Urwa … well, had a great fall.

Shaking a leg on her song Darbadar from Na Maloom Afraad, she lost her balance and slipped as she rushed to the front of the stage. Kudos to the starlet for continuing with her performance, but she seemed visibly shaken by the incident, unable to keep up with the back-up dancers. From a PR standpoint, this may be a fatal flaw but from a cinematic point of view, it ended up nicely when Farhan dedicated his award to his ladylove.

A recurring feature in almost every award show across the globe is to pay tribute to past legends for their countless years of service. But it was certainly a first when Jimmy Khan emerged on the stage with his guitar, performing a medley of Ali Zafar’s Chal Dil Meray and Nadya, followed by Sara Haider, Uzair Jaswal and Farhan Saeed’s renditions of Rangeen, Jhoom and Channo respectively. It was nothing short of strange that an artist as young as Ali was being paid a homage to when he still has years to give to the industry.

What was worse was that Farhan, who has had his own share of success as the vocalist of Jal, performed sang in honour of his contemporary. The only good that came out of this was that the four musicians managed to cajole Ali into a ‘well-rehearsed’ impromptu performance on Rockstar, one of the better acts of the evening along with Amna Ilyas and Ahmed Ali Butt’s. After the drama and controversy that served as precursors to the event, it’s no less than a miracle that the organisers were able to put the show together. But anybody who saw this jarring display of under-rehearsed performances coupled with below-par hosting wouldn’t daresay the LSAs can be touted as Pakistan’s premier award show.