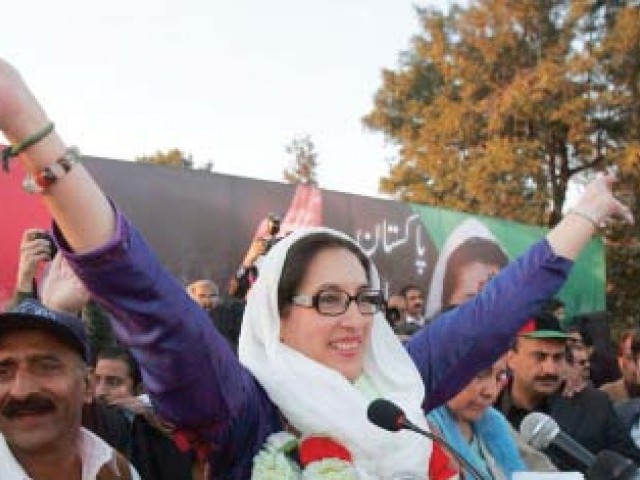 ISLAMABAD: A lawmaker from the ruling PPP has pointed a finger at the country’s security establishment for the assassination of Benazir Bhutto as the government promised it will make public an investigation report into the high-profile murder.

“Those who prepared mujahideen for the sake of American dollars and then nurtured another generation of terrorists for more dollars are behind her (Bhutto) murder,” said MNA Nadeem Afzal Gondal in the National Assembly.

Though the statement carried a not-so-veiled reference to the country’s top spy agency, Gondal preferred not to name an individual or institution.

He also said that as the head of a parliamentary committee that probed the murder of a Baloch youth, he found out that a serving colonel of the Pakistan Army killed the youth. “The killers of Benazir Bhutto are the same,” he said.

Another PPP lawmaker, Nawab Yousaf Talpur said the government would present a report into Benazir’s murder to the party’s Central Executive Committee (CEC). That will also be made public, he added.

Earlier, several members from the opposition asked the government to explain why it had failed to punish Benazir’s murderers despite being in power for almost three years.

The ruling PPP appeared to be backing calls from the opposition for a review of the national anti-terror policy that envisages putting an end to drone strikes inside the tribal regions.

PPP Information Secretary Fauzia Wahab said the government supported demands for holding a debate in parliament on Pakistan’s role in the global war on terror but rejected a call to convene an all parties’ conference for this purpose.

“The debate should be here (in parliament) … it is the most appropriate forum for that,” Fauzia told the house after opposition MPs said that the government must overhaul what they called a flawed security and foreign policy.

But Fauzia urged the parliamentarians to also debate rising trends of militancy and extremism in the country and suggest a way out.

Muttahida Qaumi Move­ment’s (MQM) Wasim Akhtar demanded an all parties’ conference to also discuss what he called rising corruption in the government departments.

Women lawmakers from across the house voiced support for enhancing punishment for those involved in throwing acid on women’s faces or disfiguring parts of their bodies.

But a bill on domestic violence that PPP’s Justice (retd) Fakhrunnisa wanted the house to pass was deferred till next week to incorporate suggestions from other members in an attempt to make it comprehensive.