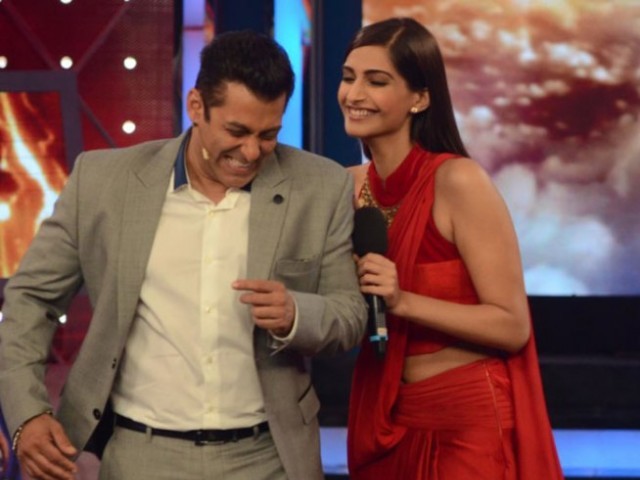 Actress gushes about working alongside the B-Town megastar. PHOTO: REDIFF

Comedy, romance, action — Bollywood megastar Salman Khan has played a variety of roles since his start in tinsel town. This time he is romancing Sonam Kapoor in upcoming film Prem Ratan Dhan Payo and the fashionista is beyond ecstatic.

“I like him in romantic films. That’s the reason I am doing Prem Ratan Dhan Payo, I feel Salman is amazing at romance,” said the actress as quoted by NDTV.

Read: I don’t behave like a star: Salman Khan

With movies going through a roller coaster ride at the box office of late, Sonam hopes their film is well-received by the audience when it hits cinemas, but she knows Salman is enough to rake in the numbers.

“The film stars Salman Khan and I am sure it’s going to open (with) ridiculous figures. But you hope it does well for the producers. I hope people appreciate it. It’s a Sooraj Barjatyaji-film and he connects with the family audience a lot,” she said.

But according to DNA, Prem Ratan Dhan Payo has garnered quite a bit of attention, and now that its trailer will be attached to Akshay Kumar’s Singh is Bliing, excitement is at an all time high.

Read: I would love to work with Hrithik in a feature film: Sonam Kapoor

The Bollywood megastar is planning on releasing the entire PRDP album in a week’s time. The poster is scheduled to be released this weekend.

“Salman had tweeted the logo of PRDP few weeks back. He will tweet the first poster of the film as well. The first poster will give you a candid first look into Salman and Sonam’s chemistry in the film,” added DNA‘s source.

Logon this is the logo of PRDP, matlab Prem Ratan Dhan Payo. Coming this Diwali pic.twitter.com/cAdWPAAxmT

The trailer launch will be on Oct 1 and according to the source it will be a “grand affair”. “The main climax of the film happens in an amazing Sheesh Mahal that the team built in Karjat. The entire team is planning to launch the trailer in a similar atmosphere to give a taste of the huge canvas and the grandeur the film will be known for,” the source said.

Prem Ratan Dhan Payo is a family drama by Mr Barjatya and Salman will reportedly be seen in a double role in the film.

Tamasha trailer is out!