Heatwave crisis: Government has done nothing and is still sleeping, complain doctors

Heatwave crisis: Government has done nothing and is still sleeping, complain doctors 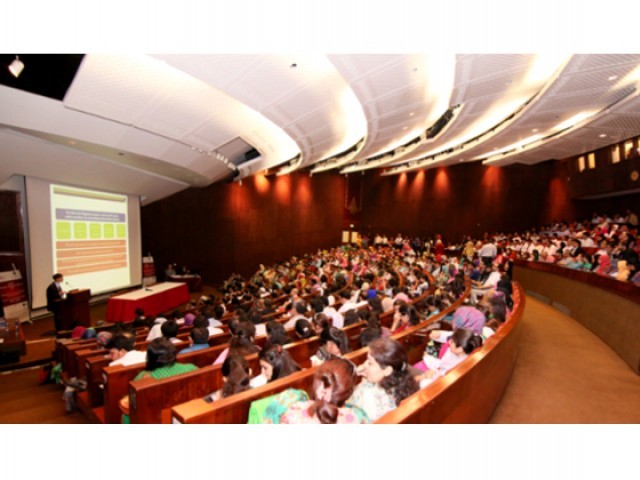 KARACHI: Medical experts and civil society activists have criticised the Sindh government for not responding in a timely manner when the heatwave hit the provincial capital, killing hundreds of its citizens.

Dr Seemin Jamali, the joint executive director and the incharge of the emergency ward of Jinnah Postgraduate Medical Centre (JPMC), disclosed that the attitude of the government was not serious in the emergency. “The government woke up very late,” she added. “The attitude would have been different if the unconscious people were from posh areas.”

In the ‘Annual Emergency Medicine Conference 2015’ titled ‘Integrating Clinical Care and Public Health in Emergency Medicine’ organised by the Aga Khan University (AKU), the speakers said that the role of the government is always questionable in emergencies.

“The government has done nothing and is still sleeping,” criticised Jibran Nasir, a lawyer and human rights activist. He said that most of the people affected by the heatwave were from katchi abadis.

Criticising the role of the civil defence, Nasir said that it has done nothing in emergencies. “It has to train people for emergencies, not only for war but for peace-time calamities as well.  There is huge budget for it but it does nothing,” he claimed.

“Yes, I accept that the government was informed late about the situation,” said Abdul Rashid, regional director of the Meteorological Centre. “But the power outages also made the situation more critical,” he said.

Explaining the situation at AKU during the heatwave emergency, Dr Munawar Khursheed, the assistant professor of the department of emergency medicine, said that his staff and the hospital faced the same situation as all other public and private hospitals of the city.

“No hospital can accommodate such a large number of patients coming at the same time,” Dr Khursheed explained. “There was a shortage of staff, a shortage of beds and there was even a shortage of ambulances across the city.”

He said that there is no exact figure of how many people died due to heatstroke, adding that the government’s number is 1,300 while the media says it is more than 2,400.

Dr Khursheed said that 17 people were brought dead to the AKU while 22 died during treatment.

Khalid Pervez, head of the Aman Community Health Programme and Aman Clinic, was of the view that all stakeholders should prepare themselves as the same situation will reoccur throughout the next decade.

Justifying the government’s actions, the Provincial Disaster Management Authority’s deputy director, Syed Muhammad Shayyan Shah, said that all district administrations had been directed to participate during the emergency. “We established camps and tried to manage the situation,” he claimed.

The participants agreed that the people of Karachi came forward and helped the affected people. They suggested the government hold awareness sessions and disseminate information to the masses through the media and religious leaders.

The speakers urged that the data of all public and private hospitals should be gathered to figure out the cause of the heatwave, urging the need for liaisons between different departments.

Speaking of the city’s greenery and its impact on reducing the temperature, the speakers said tree plantation is very important. “Almost 20 per cent of heat can be absorbed by the vegetation,” pointed out Mir Shabbar Ali, professor and chair of the department of urban and infrastructure engineering at NED University. “The greenery has reduced to only five per cent in Karachi,” he disclosed, urging that the situation can be made better in the coming years if plantation is initiated by this year.