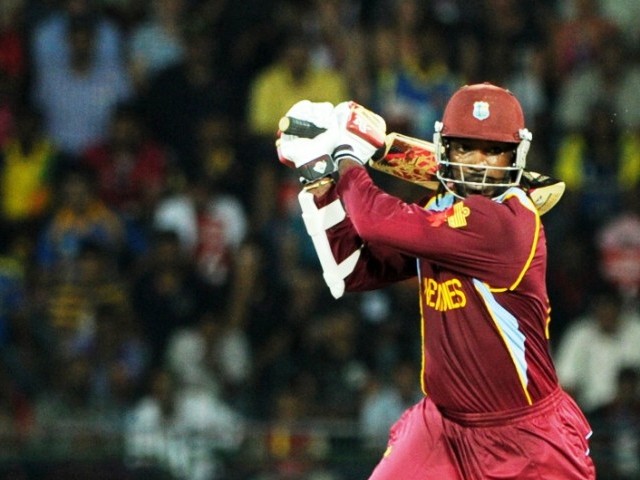 Pakistan opener Ahmad Shahzad was also ecstatic about Gayle’s participation in the league.

Big news for #PSL finally @henrygayle on board now,,even though he has few other options but he gave preference to Pakistan super league.1/2

“We can confirm that Gayle has just given his availability to play in the PSL and it can’t get bigger and better for us,” a PSL secretariat official told The Express Tribune.

“There are only few players who enjoy the reputation which Gayle does and thus we’re very excited to have him among the list of international players.”

The PSL is scheduled to be held in Doha, Qatar from February 4, 2016, and some of the biggest names in cricket have shown interest, and are ready to set the tournament on fire.

From West Indies, apart from Gayle and Sammy, the hard-hitting Kieron Pollard is ready to make an appearance in the PSL, while the top two bowlers in International Cricket Council’s T20 rankings – Sunil Narine and Samuel Badree – have also shown availability for the tournament.

Dwayne Bravo is also interested in representing a team in the PSL.

From Sri Lanka, the veteran opener Tilakaratne Dilshan, who is famous for his unorthodox style and the ‘Dil-scoop’, is up for grabs while the Carrom-ball wizard Ajantha Mendis is also interested in representing one of the five sides in the PSL.

Thisara Perera, who was on song against Pakistan in the recently concluded series in the Island, is  another player who has expressed his interest.

New Zealand’s semi-final hero in the 2015 World Cup, Grant Elliot, will be available for the tournament as well, while Australian Brad Hodge is another player who is ready to present his services in the event.

Meanwhile, Wasim Akram and Ramiz Raja have been taken onboard as ambassadors to boost the profile of the T20 tournament.

‘This is Sparta’ is US Open champ Djokovic’s battle cry