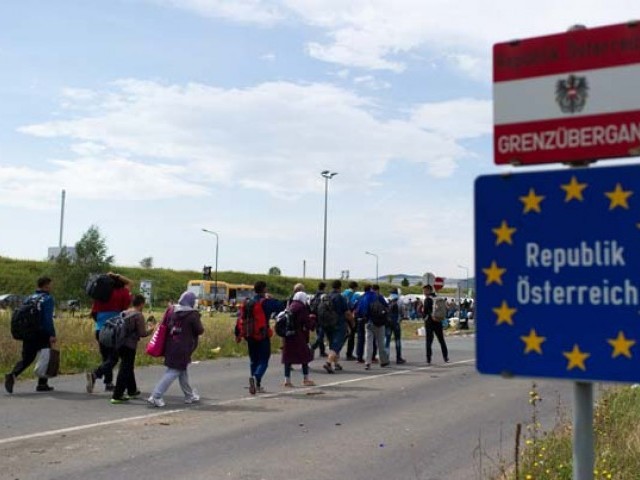 ROSZKE, HUNGARY: Hungary is using special trains to transport thousands of migrants from Roszke near the Serbian border to the Austrian frontier, apparently without registration, a spokesman for the United Nations refugee agency (UNHCR) said on Monday.

The development suggested a record surge in arrivals — with the number of refugees and migrants reaching nearly 6,000 on Sunday — had moved Hungarian authorities to abandon efforts to have all those entering European Union territory registered on the spot.

A Hungarian police spokesperson could not be reached immediately for comment.

“The situation is that after crossing the border these people have arrived at the collection point in Roszke, where there is no official procedure, people are just being collected,” UNHCR spokesman Erno Simon said.

“Earlier these people were being taken to the registration points … this is not happening now, but rather, buses are taking people from the collection point to the Roszke train station according to our information,” he said.

Read: UN warns many refugees will be left in ‘legal limbo’ in Europe

Government spokesperson Zoltan Kovacs said those arriving were still registered, although at other locations in Hungary to ease pressure on authorities in the south.

“Hungary is fulfilling all its international and European obligations, including registration,” Kovacs told Reuters in an emailed response to questions.

“At the same time we are trying to ease the pressure on Roszke, therefore the protocol is being followed at those locations (i.e. at Szentgotthard) where we provide shelter for migrants,” he said.

Simon said since 10 am on Sunday, special trains have been leaving Roszke train station one after the other without stopping en route to the Austrian border. On Sunday alone more than 2,000 people left Roszke on three trains, he said.

Simon said the UNHCR learned from volunteers at the Austrian border that after a four-hour journey the trains arrived there.

A Reuters reporter on the Serbian border saw police putting people on buses.

At Roszke railway station police were putting hundreds of migrants on a special train which had at least 15 carriages, a Reuters reporter said. A policeman told Reuters the trains were bound for Hegyeshalom at the border with Austria.