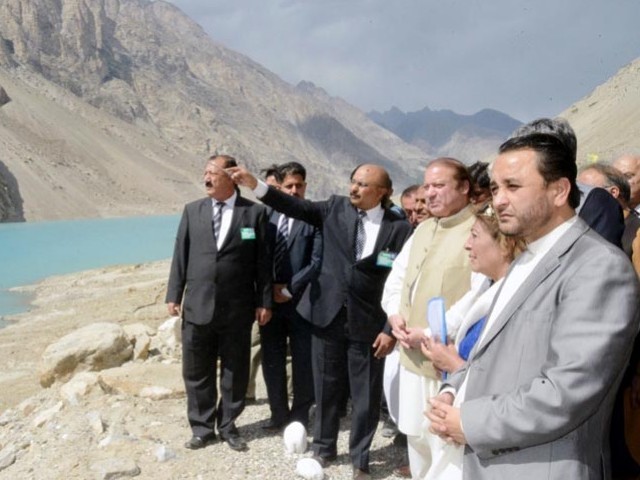 Prime Minister Nawaz Sharif inaugurated on Monday tunnels over Attabad Lake constructed to restore the Karakoram Highway which was damaged in 2010 due to land sliding.

The five tunnels are part of a 24-kilometer long portion of the reconstructed Karakorum Highway.  Two big bridges and 78 small bridges have also been constructed.

The premier was briefed about the Attabad Tunnel project by officials of the National Highway Authority. The project was completed in a span of three years and two months. Prime Minister Nawaz Sharif is briefed about realignment of KKH at Attabad Lake in Gilgit-Baltistan on September 13, 2015. PHOTO: PID

“This sum is at least three times larger than the annual development budget of Rs8 billion for G-B and reflects our love for the people of this area.”

Speaking to the members of G-B Assembly during his visit, the premier said, “Mega development projects are necessary in G-B.”

Welcoming the increase in tourism in the area this year, PM Nawaz said, “Around 0.7 to 0.8 million tourists visited G-B this year.”

“This is the first time such a huge number of tourists from all over the country visited this area in a year,” he added.

Further, the prime minister said the increase in tourism will help restore the confidence of international tourists which will subsequently improve G-B’s economy.

PM Nawaz also ordered officials to ensure transparency in development projects. “We will successfully carry out the projects of hospitals, universities and other developmental projects.”

The premier also appreciated the assistance of the Chinese government in projects related to the development of the area as well as in the projects being carried out in Gwadar.

Earlier, GB chief minister received the prime minister upon his arrival and briefed him about other on-going projects in the area.

The restoration of Karakoram Highway is linked with the historic China-Pakistan Economic Corridor (CPEC) project which will usher a new era of development in the country’s economy.

The prime minister had further announced Rs150 million for the National Disaster Management Authority (NDMA) while appreciating the body’s efforts for uplift activities across the country.