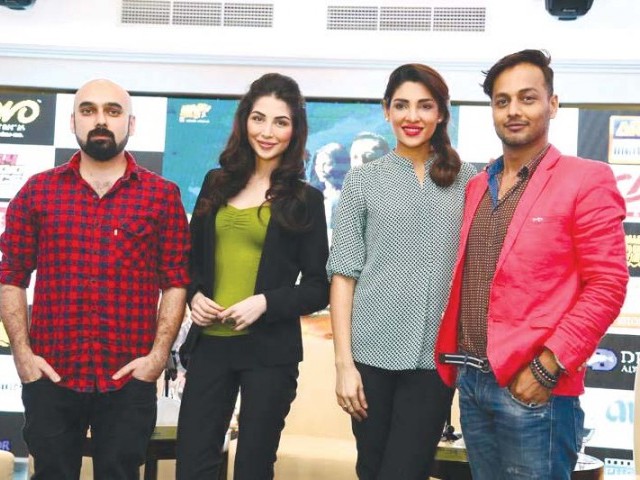 Jaswal with actors Sabeeka Imam and Zhalay Sarhadi at a promotional event for Jalaibee. PHOTOS: PUBLICITY

ISLAMABAD: With its star-studded cast and glamorous sets, the 2014 crime-caper Jalaibee had audiences eagerly waiting to devour it prior to its release. But as it hit the screens last year, it opened to mixed reviews. While Ali Safina and Zhalay Sarhadi’s performances were lauded, the film received a lukewarm response at the local box office. As filmmaker Yasir Jaswal looks back at his debut movie, he shares the lessons he learnt from the film and how he has been busy working on his upcoming venture.

Jaswal feels today’s audiences have evolved in how they look for a tight script and solid entertainment. “These are not the audiences that watched the gandasa movies. This is a new lot altogether,” Jaswal said. Brimming with optimism, Jaswal shared that he loves criticism because it allows him to see his work from the audiences’ perspective.

Acknowledging that Jalaibee’s script, which he wrote himself, wasn’t crisp enough, he said it was still a good attempt for a first shot at filmmaking. “Our journey is one of constant learning. We learn on the way and try to make sure we don’t make the same mistakes again. If we won’t make mistakes, we won’t ever learn,” noted Jaswal.

Jalaibee, starring Danish Taimoor, Ali Safina, Wiqar Ali Khan, Sabeeka Iman and Zhalay Sarhadi, was woven around two friends Billu and Bugga, who get entangled in a debt with a local mafia. As they try to pay off the debt, their lives get interwoven with those of other characters in the film.

Even after getting disappointing feedback from Jalaibee, he doesn’t regret anything about the film. “I learnt that nothing is impossible. Our industry may be small and we may not have the budget to compete with international films, but there’s nothing that we can’t achieve. There’s still a long way to go for us,” he added.

He hopes that people won’t raise such complaints about his upcoming film, for which he’s working with his friend Sarmad Mirza. He doesn’t wish to disclose anything about the movie’s storyline just yet. With his fingers crossed, Jaswal sees Islamabad as a promising city for shooting films, especially with Reham Khan’s film Janaan releasing soon.

“I’ll not give up until Islamabad becomes a serious filming arena,” asserted Jaswal, predicting a bright future for the country’s capital. Having big hopes for the already flourishing Pakistani film industry, he’s determined to work towards bigger and better projects in the future.