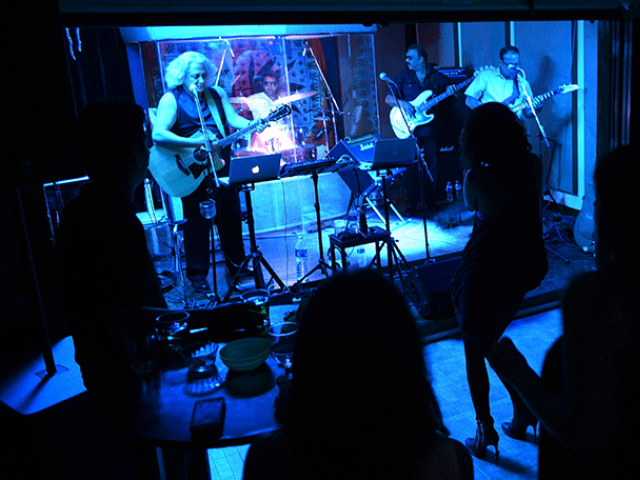 KARACHI: Karachi, Pakistan’s biggest and most diverse city, was once home to a famous nightclub scene where alcohol flowed freely and luminaries from the world of jazz played to packed crowds eager for a taste of Western culture.

Today, a new generation is seeking to revive the partying traditions of their parents and grandparents — albeit behind closed doors.

At a luxury hotel in the metropolis of 20 million — better known for bitter political acrimony, gang violence and bloody turf wars — it is after midnight and the private party has just started.

In a room decorated with chandeliers, several hundred guests are letting their hair down. The music is loud and the bar is busy.

A young female DJ, tanned and tattooed, is in control of the beats. Men dressed in suits and ties chain smoke as they listen to the electro-funk of Daft Punk, as women in slinky dresses strut across the dance floor.

The partygoers are from a generation that tasted the freedom of a foreign university and overseas travel before returning home to Pakistan.

The party was not advertised — and from the street you would never know it was happening — to avoid the attention of suicide bombers and extremist clerics.

Before the creeping religious radicalisation from the late 1970s that fundamentally altered the country, Pakistan’s nightlife was legendary.

The golden-era began in the 1950s and rolled on until prohibition in 1977, which was followed by a slew of extremist policies that drastically altered society.

Clubs such as Playboy, Excelsior, Oasis, Samar, Club 007 all competed to be the place to be seen by Karachi’s hip young crowd.

“We used to have a good nightlife with bands, drinks and dancing but it’s gone,” recalls Imtiaz Moghal, the manager of the Metropole Hotel, once one of Karachi’s hottest nightspots, but which now lies semi-derelict as it awaits renovation.

“It is a haunted house,” he said as he wandered through the crumbling remnants of the once-grand hotel.

Gesturing at the carpark, he said: “That used to be a club and a disco. It hurts to think about it now.”

In Karachi’s heyday, politicians, young people, belly dancers, foreign diplomats, the cabin crew of foreign airlines and musicians from touring Southeast Asia orchestras were all swept up together in the melee of the city’s nightlife.

“The order of music was that you would warm up and then play some more popular songs, and (then) you played the louder music… towards the end of the evening you wind down because people had romantic intentions,” recalls former bandmember Leon Menezes.

From 1970 to 1975, sporting  long hair and oversized sunglasses, Menezes’ band The In Crowd was one of Karachi’s most popular.

The elder Bhutto was a regular at many of Karachi’s nightspots and was known to enjoy his whisky.

Menezes, now a teacher at a Karachi business school, recalled the day of the inauguration as an “incredible piece of history”.

“In the afternoon we were walking into his house to set up and there was Mr Bhutto… I was carrying an amplifier and a guitar in one hand. And I said, ‘Good afternoon, sir’. And he said, ‘Good afternoon’. I said, ‘Sir, will there be dancing?’ He said, ‘I don’t know but (if there is) please don’t hide yourself.'”

Five years later, Bhutto caved in to pressure from increasingly influential Islamists and banned alcohol, before being overthrown and ultimately hanged by the military government of Islamist general Zia ul-Haq.

“That completely changed the hotel industry in all of Pakistan,” said Happy Minwalla, owner of Metropole Hotel. “Karachi was all about entertainment, about fun, about people doing things. Sadly the situation has changed.”

Prohibition was the death knell for the clubs, but it did not eradicate the thirst for a nightlife.

Today, most parties happen behind the closed doors and high walls of private homes. “Wine shops”, often run by Christians, sell alcohol to locals, while bootleggers deliver high-end liquor to the doors of the wealthy.

Pilot Akeel Akhtar turns his home into a club twice a month for a select group of guests with Pink Floyd, the Rolling Stones and modern hits blaring out.

“This is a private place, we don’t put (it) on any social media, Facebook, we don’t advertise it at all. It is just between friends,” he explains, as he pulls out his electric guitar to the delight of his guests.

“We do not have pubs (in Pakistan), and this place is the closest to it,” said Nida, as she sways to the music in the early hours.

“We end the evening with friends on the beach. Will you come with us?”