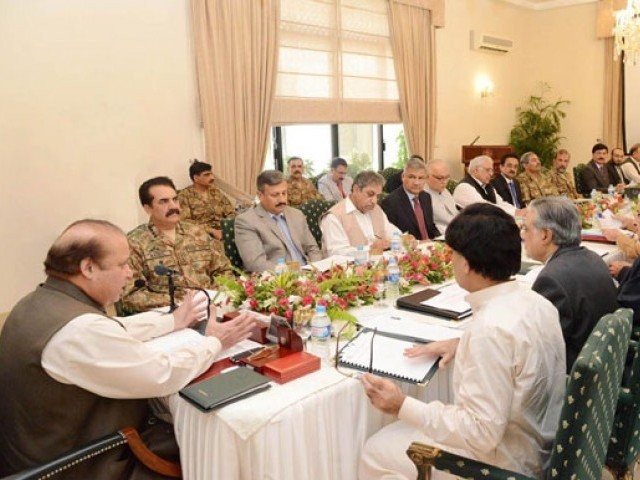 Prime Minister Nawaz Sharif chairs a meeting to review progress on implementation of the National Action Plan (NAP) at the PM's House in Islamabad on September 10, 2015. PHOTO: PID

In addition to the military courts, the government has decided to increase both the scope and number of special courts formed under the Protection of Pakistan Act  (PPA) 2014 for the swift trial of all those who are ‘enemies of the state’ and disrupt peace.

“In an effort to speedily execute the National Action Plan (NAP) against terrorism, the government is making these special courts functional this month,” announced Interior Minister Chaudhry Nisar Ali Khan at the conclusion of an apex committee meeting held at the PM House on Thursday.

“Five special courts have already been established under this law and hundreds of cases of ‘peace-disrupting elements’ were cleared by ministries of law and interior for trial,” revealed a senior official of the National Counter Terrorism Authority (Nacta).

“Both military and special courts will speed up the trial of ‘hardcore terrorists’ while cases of criminals involved in sectarian violence will also be tried in special courts,” he told The Express Tribune.

Some 48 cases are already being tried in nine military courts which have disposed of 28 cases, but special courts formed under PPA 2014 have not started functioning, he added. “Parliament has already given legal cover for formation of both the courts after passage of the 21st Amendment,” he said.

Speaking to the media, the interior minister said the country’s top civil-military leadership has approved a countrywide crackdown against sectarianism ahead of the holy month of Muharram.

“There is zero tolerance against those who call others ‘kafir’ [apostate] — legislation is being drafted to nip the evil in the bud,” he said, adding that cameras will be installed in some madrassas and mosques under watch.

“It was unanimously decided …today that elements challenging the writ of the state would be eliminated,” he said. “There is a very thin line between sectarianism and terrorism. They both go hand-in-hand,” he added.

However, the interior minister said the process of registration of madrassas will continue in consultation with their leadership. “They will first meet with federal interior secretary and then the provincial leadership,” he said, adding that clerics should portray the narrative of Islam and Pakistan rather than of those who kill the innocent.

He said it has been decided that a joint strategy should be adopted by the federal and the provincial governments to deal with several issues.

“The issues which came under discussion during the meeting were NGOs, arms licences, security companies and sectarianism,” he said.

“It is the duty of the federal government to keep an eye on the international NGOs and regulate them while at the same time, the provincial governments are also required to regulate the local NGOs,” he said.

Nisar informed the media that the interior ministry has prepared a regulatory policy for the NGOs in a record time of just 2.5 months after Premier Nawaz announced the government’s decision to regulate the NGOs in June 2015.

“We will issue the policy very soon after sharing it with provinces to help them formulate a similar policy document to regulate local NGOs,” Nisar said.

He, however, clarified that regulation on NGOs does not mean putting a ban on any of the good work being done by them in the country. On the issue of arms licences, the minister said the federal government will shortly introduce a fresh policy for renewing old arms licences and revoking licenses of those who do not renew their licences.

About geo-tagging of madrassas, he said only Punjab and Islamabad have completed the task. A committee under chairmanship of Mufti Muneebur Rehman has also been formed for counter-narrative, a move to de-radicalise the society, he added. “The clerics are meeting many government functionaries next week to finalise procedure of seminaries’ registration,” he added.

To a question about Imran Farooq’s murder case, Nisar said investigation in Pakistan has been concluded. “We have done without international commitment and now this case is being pleaded in the UK,” he said, adding that the UK government did not request Pakistan to hand over three accused to the Scotland Yard team.

According to official statement, he said there is a need to be vigilant in ridding the country of terrorism and extremism.

According to informed sources, the members also discussed ways to deal with the recent escalation of violence in Karachi and sectarianism in Punjab. The meeting was apprised that al Qaeda and its attached wings have been rooted out from the city of Karachi.