Speake­rs say no nation can cope with the menace in isolat­ion
By Our Correspondent
Published: September 11, 2015
Tweet Email 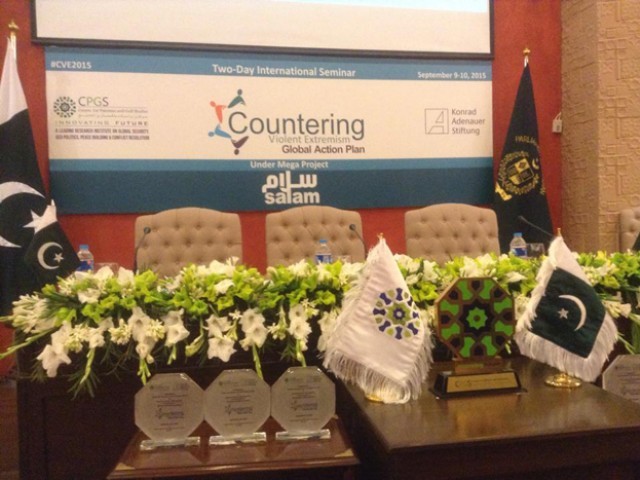 Speakers say no nation can cope with the menace in isolation. PHOTO: fb.com/CPGS.org

ISLAMABAD: Participants of a seminar have urged the United Nations to come forward and take the lead in the fight against violent extremism.

They were speaking at the concluding session of a two-day seminar titled “Countering violent extremism: global action plan”, organised by the Centre for Pakistan and Gulf Studies (CPGS) in collaboration with Konrad Adenauer Stiftung here on Thursday.

The participants said that violent extremism could only be fought under the umbrella of a global venture which required a centralised effort to lend the effort a direction and continuity.

They further called for greater international collaboration for tackling the problem instead of solely relying on the military option. They said that efforts needed to be made to promote peace and reconciliation in Afghanistan.

They also called for preventing proxy wars and sponsorship of terrorism. Federal Minister for States and Frontiers Region Lt-Gen (retired) Abdul Qadir Baloch said that extremism in Pakistan began from the tribal areas, which hosted fighters from all over the world during the Afghan-Soviet war.

He said the militants maintained a stronghold there till military operation Zarb-e-Azb was launched. Baloch said that the government reversed the policies of the past and now there were no good and bad Taliban.

Russian Ambassador Alexey Dedov discussed the steps the Shanghai Cooperation Organisation had taken to counter the threat of extremist violence in the region and said that his government was ready to work under the aegis of the UN to fight extremist violence.

He said that countries should not only deal with the symptoms, but also tackle the root causes. The envoy emphasised on dealing with problems such as terror financing and narcotics trafficking

Chinese diplomat Yu Xueyong said Pakistan had made great sacrifices in the fight against terrorism, which need to be recognised by the international community. China, he said, looked forward to continue working with Pakistan for regional peace and security.

He said that the Pakistan Army had been performing well in Operation Zarb-e-Azb and hoped that more progress could be made so that conditions conducive for economic development could be created.