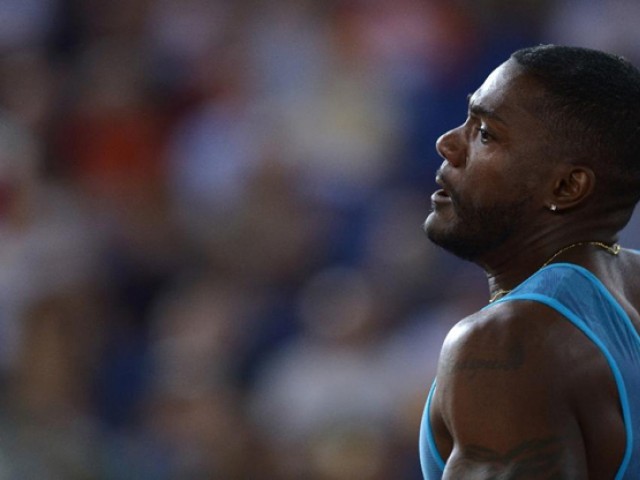 US sprinter Justin Gatlin celebrates after winning the 100m at the Golden Gala in Rome on June 4, 2015. PHOTO: AFP

Bolt pushed Gatlin into second place in both the 100 and 200m at last month’s world championships in Beijing, in a clash built up by some as a symbolic victory of a clean sprinter over a drugs offender, given the American’s two-time doping ban past.

The Jamaican, however, has opted not to race in the 200m at Brussels, expressing his desire to rest up before turning attention to preparing for the 2016 Rio Olympics where he will bid to defend his “double-treble” gold haul in the 100, 200 and 4x100m relay.

That has cleared the way for a tilt at both sprints here for the 33-year-old Gatlin, who bounced back from his first doping ban to win Olympic 100m gold in 2004 and double sprint titles at the Helsinki worlds in 2005 before serving a second suspension between 2006-10.

One of the highlights of a packed evening session at the Stade King Baudouin II featuring 23 Olympic gold medallists and 48 world champions will undoubtedly be the women’s 200m.

Newly-crowned world champion Schippers will come up against American veteran Allyson Felix, the most decorated female athlete in IAAF history.

Felix claimed gold in the world 400m in Beijing, having dominated the 200m for many seasons, and could only watch on as Schippers ran the fourth fastest time ever, 21.63sec, to win gold in the half-lap race.

“It is exciting to see new talents coming up in the event and I love new challenges,” said Felix, a three-time world 200m champion and reigning Olympic gold medallist whose best of 21.69sec set in 2012 places her sixth on the all-time list.

The 4th ODI: All to play for in Headingley