We err when we wish to seek victor­y in this war in litera­l terms and convol­ute histor­y to contri­ve one
By Shahzad Chaudhry
Published: September 5, 2015
Tweet Email 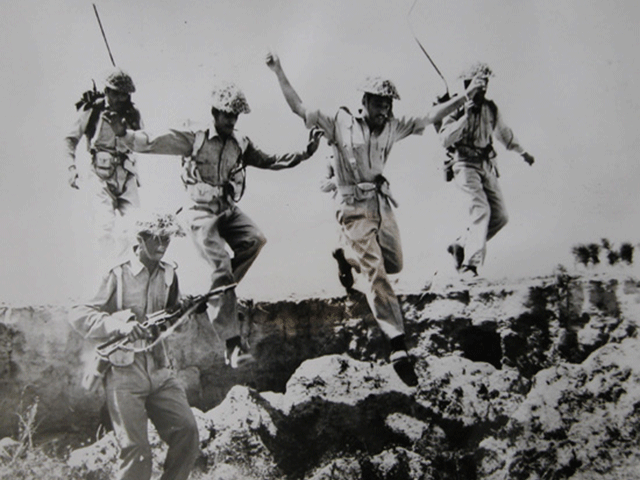 The most notable achievement of the 1965 War was not that Pakistan won – it did not – it was that India did not win. That is about the maximum extent of objectives that this war served. Wars are fought to achieve political aims; when they do not, they are failed wars. In 1965, both sides failed to achieve their political objectives and thus both lost; in more respectable terms it is called a stalemate. So much so, that the two needed to fight another war in 1971 to achieve their political ambitions. In this case, India won and Pakistan couldn’t prevent the loss.

Of valour, outstanding commitment to the mission, tactical brilliance, and courage, there was no shortage in 1965. The men and women of the Pakistan Armed Forces fought with exemplary bravery and wrote many a saga of selfless sacrifice and duty to the nation. That excellence of the human spirit is what we Pakistanis celebrate, connoting victory not as a gain or loss but as a value that keeps nations alive and serves to guide future generations. We err when we wish to seek victory in this war in literal terms and convolute history to contrive one.

When Zulfikar Ali Bhutto and Lt Gen Akhtar Malik conceived Operation Gibraltar, it was to sever Kashmir from the Indian mainland. The infiltration of irregulars to bolster the freedom movement inside Kashmir, instigated a series of rebel actions that provided the backdrop for the engagement of regulars on the ceasefire line (CFL). The CFL began to be regularly violated and small troop movements began on either side of it. That gave cause to bigger assemblies across the international border while Pakistani troops pressed in on an offensive across the CFL towards Jammu.

Perhaps the most brilliant move of the entire war was the rapidity with which Pakistani troops, under the command of Lt Gen Malik moved on the Tawi-Akhnoor-Jammu axis. They moved into Chamb and Jaurian without a fight; the enemy having receded as they advanced. Jammu was only an arm’s length away, and that would have laid open the Kathua road to Pakistan’s advancing troops, making the dream of cutting Kashmir at its chicken-neck at Madhopur a probability. Until of course minor matters of the spoils and ultimate glory came in the way.

The offensive was paused for a change of command away from Lt Gen Malik, over to the blue-eyed Lt Gen Yahya Khan. This two-day pause was sufficient for the Indian forces to hustle, dig deep and halt the momentum of the Pakistani troops. Meanwhile, to release pressure on Jammu, India opened up two fronts and war was declared on September 6. The situation on the Kashmir front never got better beyond what was reached by September 2 and 3, and Pakistan’s political objective of winning Kashmir lay buried at the altar of egotistic ambition and human pettiness. Many saw the generalship as Pakistan’s pervasive Achille’s heel. It is true for many other reasons but this particular moment in 1965 was lost to crass ordinariness and human baseness.

Here on, began a dour fight for the stalemate. Pakistan lost the offensive edge and was forced on the defensive. All of Pakistan’s war stories – popular in the public realm – are related to the courage of defending what had been wrought on itself. India opened on two fronts — one in Sialkot, as a protective manoeuvre against the growing momentum of the thrust in Kashmir and the other in Lahore. Both Indian offensives were halted by magnificent tales of personal bravery and sacrifice. On the Sialkot front, the biggest tank battle since the Second World War was fought and the Indian offensive petered out. On the Lahore front a combination of some stout defending by the much smaller defensive elements and some extraordinary support by the air force in targeting Indian forces, saved the day for Pakistan.

In seventeen days, both sides learnt a few lessons: that the plains of Punjab are not suited for rapid advance because of excessive ground friction and massive populations and structures. The gains in Kashmir will always remain a factor of brilliant strategy, not of matching numbers and firepower. And air power is the key to both offence and defence. A lesson that may not have been learnt is that military force is used to achieve political aims; if none are achieved, it amounts to failure. The larger the military, the bigger is its loss. Yet surprisingly, military leaders on both sides continue to make bellicose statements of superiority of one over another. Unfortunately, the military defeats of the other, without achieving political aims, is akin to having won a friendly match without ever entering and winning the championship. It may make a good game, but is of little consequence. It is time we stopped treating politics and the military as a game of kabaddi.

The Line of Control (LOC) and the Working Boundary are again active but this is more in commemoration of what once was. The real fight is in Fata, and in Balochistan to an extent. Karachi is an internal front. When the two nations decided to go overtly nuclear they practically bid farewell to conventional war. Under General Musharraf there were two attempts to test this theory and on both occasions the implausibility to revert to a convention was reinforced. The ten-month long eye-ball-to-eye-ball (O, how I love this term! It really makes one feel like a man) confrontation in 2002, and then the Kargil experience, both failed to breach the binds of the newer paradigm in military engagement, even as the later commanders sought ancient glory in recreating the sagas of yesteryears. Air Marshal Nur Khan was a man of his time; but in today’s construct he would be a total misfit and more likely fail unless he learned and adapted to the new realities.

As jets whiz over me in preparation of commemorating the heroes of the 1965 war, my heart goes out to them because they were only carrying out their task. In doing so, they display a perfection in their mastery and attainment over their craft. In many ways they relive the moment of their forebears who made their mark on exactly similar lines. But I question if they understand that they will ultimately be known by whether their contributions helped win Pakistan an abiding victory. And that is a matter for the generals and ministers to ponder.