Move aimed at clampi­ng down on the illega­l sale of the animal’s meat
By Shahbaz Rana
Published: September 4, 2015
Tweet Email 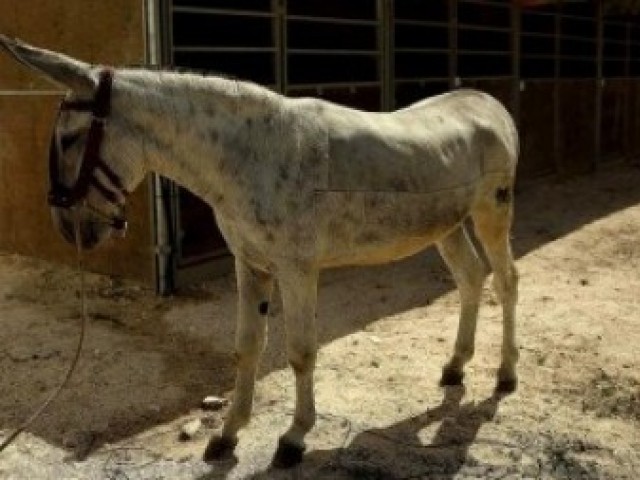 ISLAMABAD: Federal authorities on Thursday banned the export of donkey hides in a bid to clamp down on the illegal slaughter of the animal amid disclosure that its meat is being sold in place of beef in several parts of the country.

The Economic Coordination Committee (ECC) of the Cabinet moved after media reported that donkey meat is being sold illegally in major cities of the country. In the last fiscal year, the export of donkey hides grew by 217% or 129,898 hides, according to official figures. It is suspected that the meat of the same number of donkeys was sold in urban areas, particularly in Punjab.

Headed by Finance Minister Ishaq Dar, the ECC also allowed gas utility companies to raise Rs101 billion from commercial banks aimed at laying a new gas pipeline, which will have a capacity to deliver 1.2 billion cubic feet gas per day. The total cost of the project is estimated at over Rs120 billion and the pipeline will service three Re-liquefied natural gas-fired (RLNG) power plants of 3,600 megawatts that will be set up in Punjab.

The ECC banned the export of donkey hides until provinces work out a mechanism to properly dispose of carcasses of the animal, the finance ministry said. The Ministry of National Food Security and Research had noted that several broadcast media outlets have been criticising the provincial governments for failing to check the illegal sale of donkey meat. It blamed provincial governments who could not check the illegal act, despite having the Food Safety Authority.

The Model Customs Collectorate, Karachi had also highlighted the issue of abnormal increase in the export of donkey hides. The exports are largely made to China, Vietnam and Hong Kong. The hides are used in the manufacture of anti-wrinkle creams, gelatin for human consumption and other cosmetic products. The ministry noted that donkeys are either brutally killed or even poisoned to obtain unblemished hides. In 2013-14, as many as 59,634 donkey hides valued at Rs44 million were exported. The figure jumped to 129,898 hides worth Rs147 million in the last fiscal year.

The ECC on Thursday also allowed authorities concerned to continue to purchase 74MW of electricity from Iran-based Tavanir power company. The electricity is being purchased at a price of 6.25 cents per kilowatt hour. The National Transmission & Dispatch Company Limited (NTDCL) will now approach the power sector regulator for approval of extension of existing tariff from January 2015 to 31st December 2015.