Accord­ing to design­er, her ‘Mbroid­ered’ Eid collec­tion is being replic­ated; sold at a cheape­r price across the...
By MEHEK SAEED
Published: September 3, 2015
Tweet Email 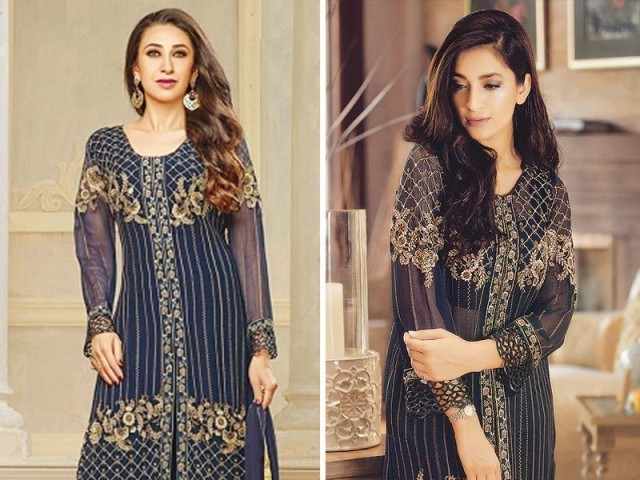 The fashion industry has forever been plagued by copied designs, with hard work turned into cheap knock-offs and sold at low prices. Numerous designer collections have been replicated by textile mills — the most recent being Maria B’s ‘Mbroidered’ Eid collection.  AA Fabrics, an Indian textile house in Mumbai, allegedly copied all 10 designs of Maria’s collection with Karisma Kapoor as the face of the shoot. An AA fabric is selling their collection at half the price of the original.

AA Fabrics’ website and Instagram says, “Indian designer suits with a touch of Pakistani style. These are MF branded and inspired by Maria B a top-selling Pakistani designer”.  The Pakistani designer is known for creating two collections every year in partnership with Sahiba Textiles, another textile house in India. But the designs by AA Fabrics took her by surprise.

“At first we thought it was Sahiba Textiles replicating these designs but then we knew there was more to it because our Mbroidered collection was made exclusively for Pakistan. The collections I design for India are based on their sensibilities and preferences,” Maria told The Express Tribune.

Upon this discovery Maria asked her distributors in India to look into the matter, a request, which they flatly refused, stating that nothing will come out of this inquiry. “They told me that ‘our piracy laws are as ambiguous as yours and you can’t do anything to take AA Fabrics to task,’” added Maria.

AA Fabrics were not available for comments. An email was sent to the textile mill six days before the filing of this report.

On the designers end, it is next to impossible to copyright every design as it proves to be a lengthy and expensive process. Design registration makes sense for prints but for a limited edition designer collection such as Mbroidered, it isn’t worth the trouble the designer has to go through.

“When going through all this trouble is so fruitless in Pakistan, we think why bother to do the same in India, where the laws are as loose,” Maria replied to a question about copyrighting her designs.

Nonetheless, she still holds this as “criminal activity”, especially since AA Fabrics is producing her designs without permission and cashing in on her brand name in India. “One understands if you take inspiration from something but replicating all 10 designs of a collection that we spent three months working on is absolutely criminal,” said Maria.

Ace designer Faraz Manan believes that ubiquitous textile mills in India have been trying to fill in the huge demand-and-supply gap created by Pakistani lawn for quite some time now. But it remains unclear whether they get the replicas made in Pakistan or India.

“Once the production is over, their agencies approach actors and get the shoots done. When Karisma modelled for Habiba Fashion, she had no idea they were selling fakes of my designs and both the sisters were quite distressed when they found out,” Manan told The Express Tribune.

However, fake copies coming into the market is nothing new for India or for Pakistan. Recently, Sana Safinaz got the FIA involved to shut down a store that was selling fake replicas in Karachi. But as far as the Indian market is concerned, such incidents may help Pakistani designers in penetrating the market even more. “It is taking our name forward in India so it hasn’t harmed our business yet”, said Maria. “But in the long run if these replicas keep coming out then people might wait for the cheaper copies.”

Manan, whose designs were also sold as fake replicas in India agrees with Maria, “It didn’t affect my business as such because the fakes came a few months later and our quality is visibly much better,” he said. Theft of designs does ultimately damage our industry but at the same time encourages designers to constantly reinvent. Besides, people who invest in designer-wear form a market very different to that of replicas.