Four Broken Hearts give a new fix on storytelling

Four Broken Hearts give a new fix on storytelling 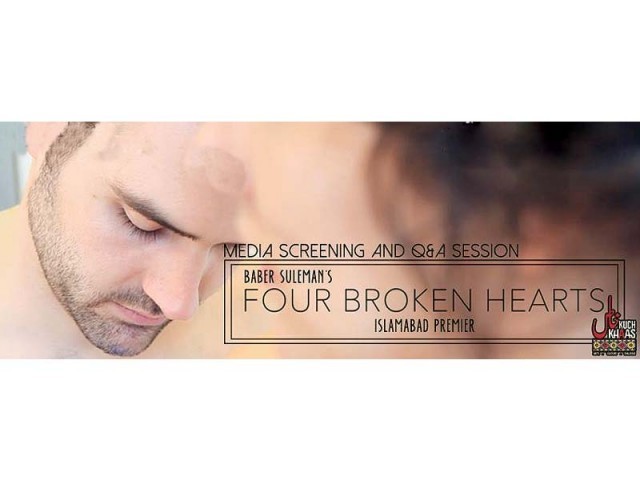 The film is an ongoing series and so far, the first two parts have released on the film’s website. PHOTOS: PUBLICITY

ISLAMABAD: In a first in Pakistan, director-writer Babar Suleman brings forth his transmedia project titled Four Broken Hearts. Being dubbed as a transmedia storyworld, the project offers a holistic experience to audiences in the form of film, live performances and social media interaction with its characters. The experimental project was screened on Tuesday at an event organised by Kuch Khaas and Like Life Itself Productions in Islamabad.

“The most challenging part of the entire production phase is explaining the concept of transmedia to the audiences,” said Babar, who plans on initiating film workshops at Kuch Khaas soon. “If the story interests them and they want to interact with the characters, they will. But this will vary from viewer to viewer,” he added. Famous international transmedia projects include The Blair Witch Project.

The screening evoked mixed emotions in the audience, with most feeling overwhelmed and fascinated by the project. Four Broken Hearts, which is to be an ongoing series, will allow the audiences to communicate with fictional characters as if they were real. “Why would I want to connect with any of these people through social media,” asked an audience member. Babar partly responded with a quip, “If you find the actors pretty, you’d want to get to know them.” This is Babar’s final thesis project at the Parsons School of Design, with his classmates being part of the cast, which is why the performances are partially and expectedly amateurish. Gabriela Bonomo plays Maha, Brennan Lowery depicts Zayn, and Asol Karim and Joe Loper essay the roles of Lisa and Aaron respectively. The film has been shot across New York City, with the sets having been portrayed in a realistic fashion.

The story takes off with a dilemma faced by a Pakistani artist, Zayn, who returns to NYC for the first time since his graduation from an art school in 2002. Zayn is accompanied by his wife Lisa, an American photo journalist, who has spent her last few years in Pakistan covering the post-9/11 terrain. Upon her return to NYC, Lisa signs a major book deal with publisher Aaron, but then comes a romantic twist.

The film is an ongoing series and so far, the first two parts have released on its website, which also features Lisa’s blog posts, invitations to Maha’s art exhibition, and the option of connecting with the characters via their Instagram, Facebook and Twitter accounts. The climax of the film will release in December in a dinner scene, where all four characters come together. Babar shared he will build the story organically as it goes along. “The story could go as long as the actors live,” he said.