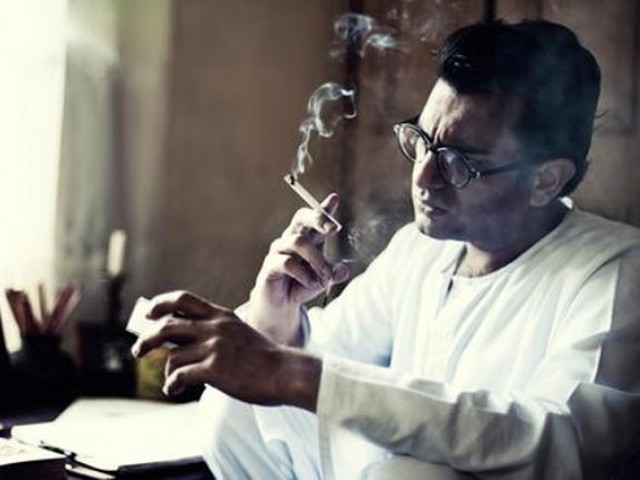 Not only did James Cameron’s Titanic go on to become the talk of the town for its ground-breaking visual effects but also for the powerhouse of a score that accompanied it. With music by the legendary James Horner, the film’s soundtrack was lauded for Horner’s imaginativeness and ability to capture the spirit of survival and emotional confrontation depicted in the film.

It seems like Pakistani music composer Jamal Rahman is tasked with a similar responsibility. As he creates music for the biopic of an individual as complex as Manto, he tells us about how he had to explore his imagination to accomplish a feat that was anything but easy.

Describing his experience as ‘interesting’, Rahman said he had to understand Manto’s writing and the psyche of each character to produce a score that could do justice to the story. “Composing music for a film such as this requires one to empathise with the characters and their environment, to get under their skin and feel what they feel,” he said. “For Manto, the music had to reflect his intense turmoil and circumstances, both within and without,” he added. Having been approached by Sarmad Sultan Khoosat in 2013, Jamal recollected how he was shown only 20 minutes of the film, through which he determined its feel and the kind of sound it merited. “We were lucky to have Sarmad with us throughout the process as he has encyclopaedic knowledge about Manto. Plus, he’s a visual director and pays attention to little details … and kept guiding us about the mood and nature of the scenes.”

Although the movie is set during Manto’s prime years, the film’s music is “predominantly contemporary,” according to Rahman. Almost all the tracks are experimental in nature and employ modern-day production techniques. “In the entire soundtrack, only Kiya Hoga is a song that is in line with the style of music popular at that time, which was gypsy jazz.”

Of the nature of the soundtrack, Jamal explained, “The score for the film is intense and intentionally disturbing at some points to the extent of being jarring. He tells us, ‘That’s how grave I felt Manto’s experience would’ve been. He’s at constant war with himself and his world with no respite on the cards.”

Notable musicians, such as Javed Bashir, Zeb Bangash, Meesha Shafi and Ali Sethi, have served as playback singers on the soundtrack for the film, with the latter two having worked in tandem with the composer during the songwriting process.

The movie entails Manto’s emotional and physical struggles, including his battle with alcoholism and how he was ridiculed by the society for his ‘controversial’ writings. Featuring an ensemble cast, which includes Saba Qamar, Sania Saeed, Mahira Khan, Humayun Saeed and Faisal Qureshi, the film is set for a September 11 release.

7 things your plants are trying to tell you