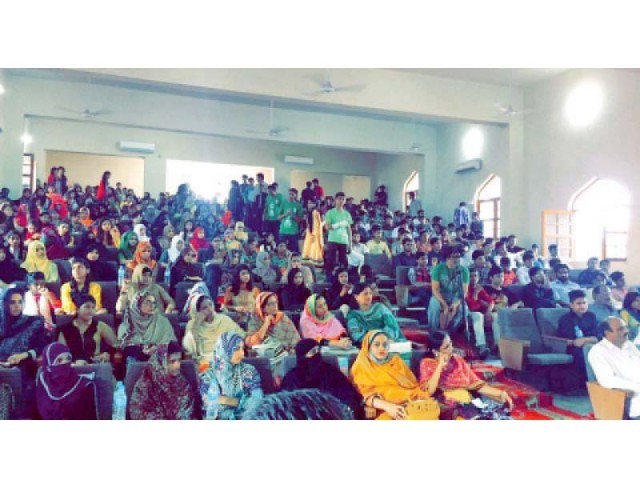 MIRPURKHAS: Throughout life one keeps discovering the opportunities that the world has to offer. Some make these discoveries quicker than others, thanks to their family and surroundings. Yet many people tend to look back and think, “I wish I had known xyz so that I could have made a different decision.” This is particularly likely to happen when it comes to career opportunities.

Keeping this in mind, Reach, Engage and Transform the Outreach (Reto) Foundation organised a career guidance programme in Mirpurkhas on August 30 that included presentations by high achievers from Pakistan and the world’s leading universities. More than 500 students, parents and teachers attended the seminar, in which speakers guided the students about the prospects of studying in the top universities across the world.  Reto is an engaging initiative launched by young professionals from different areas of Pakistan. The driving force behind the planning and logistics of the event was its student body, Shades, and, in particular, the body’s Mirpurkhas chapter’s president, Kamlish Goswami.

Kashif Shaikh and Shahzad Akbar, the co-founders and executive directors of Reto Foundation, talked about the other initiatives planned by Reto, including Shades women chapter, student clubs, computer and book drives, and upcoming Shades online portal for connecting members from different areas of Pakistan.

Talking about the vision of Reto Foundation, Shaikh said that due to the lack of information in rural areas, many people spend their entire lives not knowing avenues through which they can explore their natural skills, talents and interests. Reto has come up with a solution wherein it regularly provides career guidance to students in rural areas, through seminars and online forums, he added.