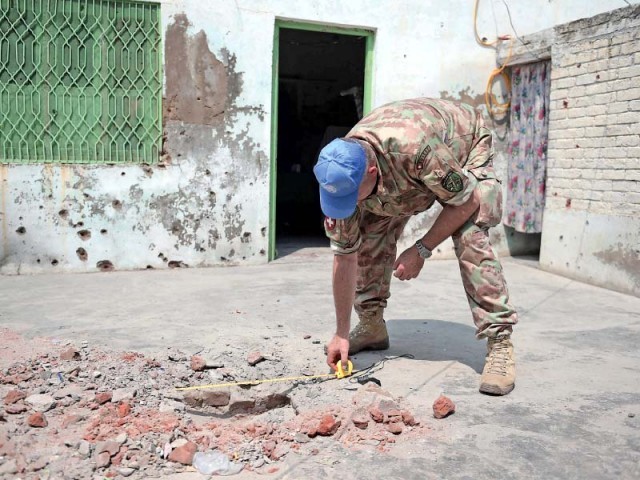 A day after the deadliest ceasefire violation by Indian border guards, a team of United Nations observers in Pakistan visited border villages in the Sucheetgarh and Charwah sectors along the Sialkot working boundary.

According to Sialkot District Coordination Officer (DCO) Asif Tufail, the UN team met residents affected by Indian shelling and sought from them details of the recent spells of shelling by Indian forces.

The observers also met the families of Pakistani civilians martyred by unprovoked mortar shelling by India’s Border Security Force (BSF) on Friday in the Kundan Pur-Sucheetgarh village. At least eight civilians – including a woman and children – were killed and 56 others wounded in the incident.

Residents told the UN observers that the BSF has been targeting the civilian population, causing loss of life and livestock, and damaging their properties. They said routine life in the areas along the working boundary has become very difficult and that many have been forced to leave their homes in search of safety.

“We will counter this situation on all levels. If war is forced on us we will take good care of them,” he said after visiting the wounded in a hospital. “Absolutely we have the right to retaliate, and retaliate in kind, retaliate in full force.”

The minister added that “if India crosses the international border and aggression is committed again, we will defend our homeland and inflict much more damage than 1965.”

Talking to a news channel the same day, Asif said the Indian government was trying to divert the attention of the country’s public from its bad governance by resorting to ceasefire violations.

“The Indian government has failed to achieve its goals. There are nearly three dozen freedom movements in different parts of India while its forces are killing people in central, eastern and northern regions,” he said. “All this can be read in Indian newspapers.”

The minister said India had started hatching conspiracies ever since the China-Pakistan Economic Corridor was announced. “India wants to keep us busy in a low-intensity war on our eastern border. Our neighbour and some world powers have been trying to keep Pakistan from economic progress for the last 68 years.”

He added that Pakistan wants peace and tranquility but is capable of responding to any aggression.