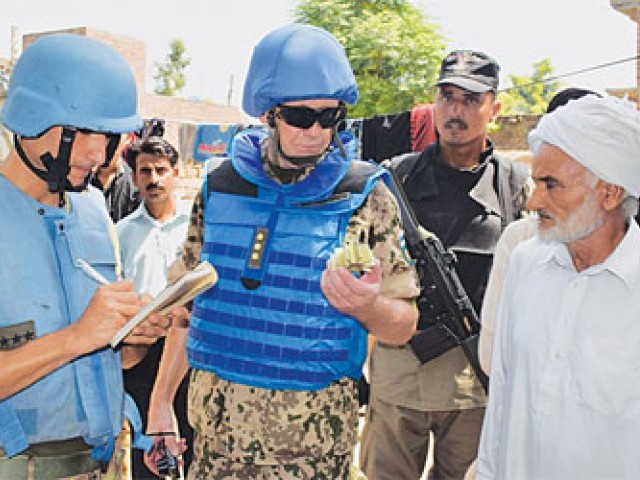 A day after cross-border firing killed at least nine people across the Line of Control, a three-member observer team of the United Nations (UN) visited Kundanpur village on the Working Boundary near Sialkot on Saturday, Radio Pakistan reported.

The UN team observed the damages and losses incurred as a result of unprovoked firing by Indian forces in the area, said Punjab Rangers Spokesperson Major Waheed Bukhari.

Pakistan’s civil and military leadership on Friday assailed Indian forces for flouting all international norms and targeting the country’s civilian population as the two neighbours exchanged the deadliest fire in recent months along the border.

While the Foreign Office summoned India’s high commissioner to register a strong protest over the unprovoked Indian firing, army chief General Raheel Sharif condemned New Delhi for ‘crossing all limits to terrorise Pakistan’s civilian population’ without any regard to all international conventions and norms.

Last week, the scheduled talks between national security advisers of both countries were called off just hours before Sartaj Aziz was set to fly to New Delhi.

Earlier this month, Pakistan’s High Commissioner in New Delhi Abdul Basit said there had been 70 ceasefire violations from the Indian side of the working boundary during July and August.