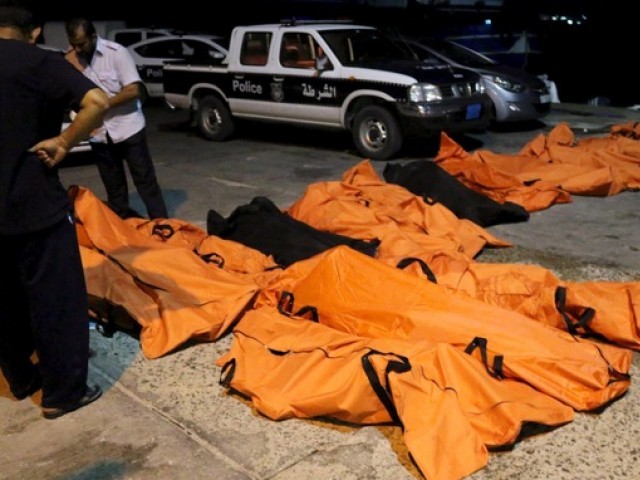 ZUWARA: Libya recovered 82 bodies washed ashore after a boat packed with migrants sank in the Mediterranean Sea and said another 100 people were missing, feared dead. The vessel sank on Thursday after leaving Zuwara, a major launch pad for smugglers shipping migrants to Italy. They exploit a security vacuum in Libya where rival governments are fighting for control four years after the ousting of Muammar Gaddafi.

Lacking navy ships, Libyan officials were searching for survivors with fishing boats and inflatables provided by locals. About 198 people had been rescued by noon, officials said. “The boat was in a bad condition and people died with us,” said Ayman Talaal, a Syrian survivor, standing next to his daughter. “We have been forced into this route. It’s now called the grave of the Mediterranean Sea.” Local officials and residents were putting bodies into red bags on a beach littered with shoes, trousers and other personal items from drowned migrants. A blue inflatable brought in more bodies.

“We, the Red Crescent, work with nothing. Some fishermen help us with a boat,” said Ibrahim al-Attoushi, an official at the Red Crescent in Zuwara. “We only have one ambulance car.” Lawless Libya has turned into a major transit route for migrants fleeing conflict and poverty to make it to Europe. Cross-border smuggler networks exploit the country’s chaos to bring Syrians into Libya via Egypt or nationals of sub-Saharan countries via Niger, Sudan and Chad. The migrants pay thousands of dollars for the land and sea passage. Smugglers often beat and torture them to press for more money for the final leg of the trip by sea in unseaworthy vessels, say rights groups.

Libyan officials brought 147 survivors to a detention facility for illegal migrants in Sabratha, west of Tripoli, a Libyan security official said, asking not to be named.