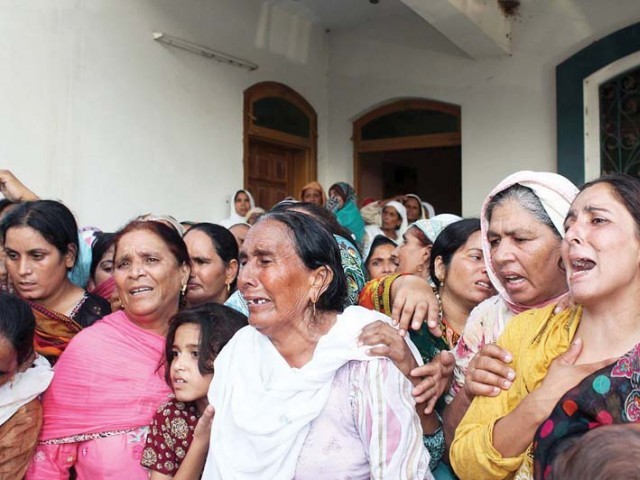 Relatives mourn the killing of a family member in shelling by the Indian forces in Charwa sector. PHOTO: ONLINE

India on Friday resorted to unprovoked aggression along the working boundary (WB) at Sialkot and targeted the civilian population, killing at least eight Pakistani citizens while injuring more than 40 others.

According to the Foreign Office, the firing by the Indian Border Security Force (BSF) started at around 11:30pm on Thursday night, when Pakistani soldiers confronted India troops for using an excavator near the WB without following the established standard operating procedures.

“Pakistani troops initially exercised restraint; however, [they] responded befittingly when India started heavy firing. The firing ended today [Friday] at 11:00am,” it added.

Updating about the Indian shelling on his Twitter account, the army’s chief spokesperson Major General Asim Saleem Bawja said  the total number of people injured on Friday was 47, including 24 women and eleven children.

Kundanpur bore the maximum brunt of the Indian aggression where seven people, including three members of a family and a woman, were killed and more than a dozen suffered injuries. The deceased were identified as Waqas, Sajjad, Waqar Ali, Saad Ali, Irshad Bibi, Mehmood and Bilal. Zulfiqar of Bajra Garhi also died in a volley of gunfire.

Due to the intense shelling, a number of people started relocating while all the schools in the border areas remained closed. The angry people of  the area also staged protest against India and shouted slogans against the country’s arch enemy. At places, youth also put Indian flags on fire.

Later, the victims were laid to rest in a local graveyard at Kundanpura in the presence of a large number of people.  People belonging to different walks of life including lawmakers from the area attended the funeral prayers.