The state has become the first to permit police drones with weapon­s
By Web Desk
Published: August 27, 2015
Tweet Email 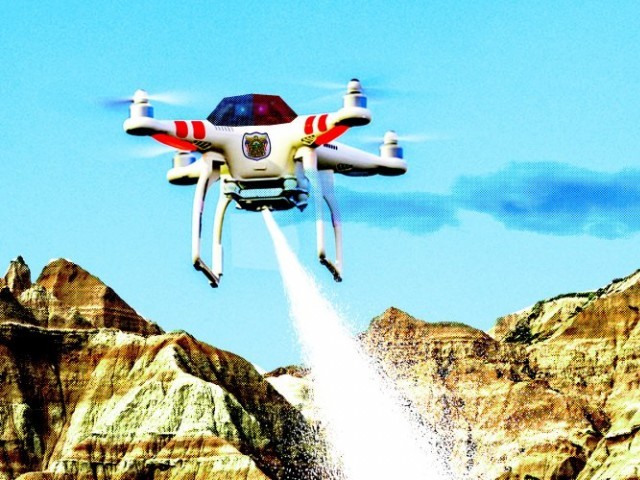 An illustration of Taser drone. PHOTO: THE DAILY BEAST

US state North Dakota has legalised drones for police which can fire ‘less than lethal’ weapons to help disperse crowds, The Daily Beast reported.

The state has become the first to permit police drones with weapons.

To legalise the move, the state amended House Bill 1328. The bill previously prohibited police to use drones equipped with weapons.

In an amendment, put forward by lobbyists, the state house committee changed the prohibition only to lethal weapons.

While the drones will not be able to rain down hellfire missiles, like the CIA operated cousins do in Afghanistan to target militants, these drones will be allowed to use “less than lethal” weapons like rubber bullets, pepper spray, tear gas, sound cannons, and even tasers are permitted for police drones.

But the problem is that careless use of “less than lethal” weapons can result in fatalities. Around 39 people have so far been killed by police tasers in 2015, as The Guardian reported.

The military have been using drones for quite some time now but the police find it a bit expensive to acquire them until recently. Lately, a California manufacturer loaned the Grand Forks County Sheriff’s Department two drones.

The question that now arises is which will be the next state that allows such drones.

The article originally appeared on The Daily Beast

What’s in a name? The debate over labelling ‘migrants’ and ‘refugees’