Intern­et users had a first-person view of his horrif­ic crime after the killer fired off tweets while on the run
By AFP
Published: August 27, 2015
Tweet Email 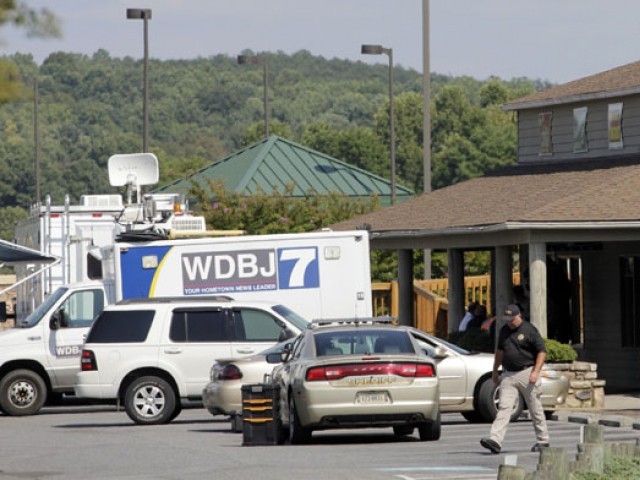 The TV truck that journalists Alison Parker and Adam Ward drove before they were killed this morning during a live broadcast sits in a parking lot near the scene on August 26, 2015 in Moneta, Virginia. PHOTO: AFP

SAN FRANCISCO: It almost looked like a first-person shooter video game: A handgun in a man’s grasp comes into view. A woman appears in the gunman’s sights. Shots are fired.

But this was no game. It was a killer’s chilling video of him stalking his prey — two journalists live on-air for a Virginia television station that fired him for erratic behavior in 2013.

But Internet users, even if only for a brief time, had a first-person view of his horrific crime after the killer fired off tweets while on the run and then posted online a video of what appeared to be a carefully planned attack.

“It’s definitely a new frontier. Except for ISIS, really nobody has done this,” he added, referring to the self-proclaimed Islamic State group.

IS uses social media to share videos of beheadings to advance its cause through terror, but Flanagan’s video marked the first time “a freelancer” operating for personal reasons used the shocking sharing tactic, according to Kay.

WDBJ reporter Alison Parker and cameraman Adam Ward were shot dead while they were conducting a live interview in the town of Moneta, outside Roanoke in southern Virginia.

Ward’s footage for the station ends with a terrifying view of the shooter standing over him, his gun pointed down at the victim. It shocked people back in the newsroom — including Ward’s fiancee — and others watching.

The station then hastily cut away to a startled anchorwoman back in the studio.

But hours after the shooting, the 56-second video clip apparently taken by Flanagan, also known as Bryce Williams, went viral, before it was removed from social media sites.

Tweets and the video were posted to a Twitter account with the handle @Bryce_Williams7 — and also on Facebook. Flanagan died from a self-inflicted gunshot wound after fleeing the scene.

His video shows the shooter walking along a wooden deck to where Parker, Ward and the woman being interviewed were standing.

Read: Two journalists killed during live television broadcast in US

All appeared unaware of the shooter as he paused and took aim slowly and methodically with a pistol.

The video shows the gun but not the person holding the camera, but it appears the gunman was operating it.

One of the tweets read: “I filmed the shooting see Facebook.” The video clip followed.

Other tweets, evidently posted while Flanagan was on the run, referred to “racist comments” allegedly made by Parker.

The first-person video was shared on Twitter, Facebook and YouTube, while imagery from the television broadcast spread online in a disturbing example of the speed and power of social media.

Auto-play features that instantly launch videos on Facebook or Twitter resulted in some viewers being shown startling imagery before having time to consider whether they wanted to see it.

A Facebook page where the first-person video had been uploaded and its associated profile were removed for violating terms of service that include a ban on “celebrating any crimes you’ve committed,” according to the social network.

The video posted to Twitter was removed on the grounds it violated its media policies. Twitter stuck to its practice of refusing to discuss details of individual accounts.

Copies of the first-person shooting video posted on YouTube were similarly quickly taken down, but at least one copy was still visible late Wednesday with a search as simple as “Virginia.”

“I know it’s a sad occurrence, but leave a Like so this can spread faster,” a YouTube user who uploaded a copy of the shooter’s video said in a chat forum beneath the post, before it too was removed.

“It’s not something you ‘Like’ to see but this is the only way it will be seen by others.”

Debate brewed over whether it should be considered acceptable to display graphic news footage online — that of the television broadcast — but not the view taken by the shooter.

“What’s the difference between this guy posting his stuff on Twitter and Facebook, and Yahoo taking the TV footage and putting it on its front page?” Kay asked rhetorically.

“The same sensationalism is operating in both cases. It’s sort of a spectacular video.”

Anchors, producers, photographers and other journalists, meanwhile took to Twitter to eulogize the victims under the hashtag #WeStandWithWDBJ.