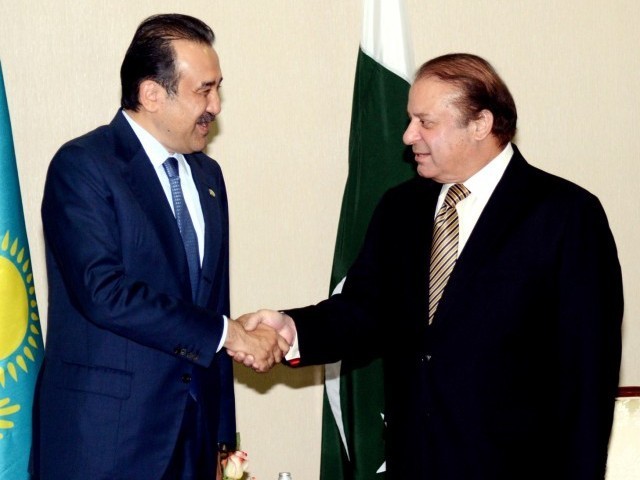 Pakistan and Kazakhstan agreed on Wednesday to enhance cooperation between the two countries in different fields, including economy, trade, energy, science and technology and defence.

“Pakistan wants strong economic and trade cooperation with Kazakhstan during his visit to the country,” he added.

Read: PM to embark on two-day visit to Kazakhstan on Tuesday

The premier underlined the importance of bilateral trade between the two economies and said he has invited the government of Kazakhstan to join the China-Pakistan Economic Corridor (CPEC). “I have invited their [Kazakhstan] government to join CPEC and they have kindly accepted.”

Further, the prime minister thanked the Kazakhstan government to have voted in favour of Pakistan during the 2013 voting in the UN.

“We are deeply appreciative of Kazakhstan for their favourable vote in the UN to help Pakistan become its permanent member in 2013 and we will also support Kazakhstan in the upcoming 2017-18 UN polls.”

Earlier, delegation-level talks between Pakistan and Kazakhstan were held during which matters of trade, economy, energy, science and technology came under discussion, according to Radio Pakistan.

During the talks in Astana, both countries discussed means by which cooperation in different fields could be enhanced, while PM Nawaz emphasised on increasing cooperation in the oil and gas sector. Both sides agreed that the joint ministerial commission will prepare a road-map for increasing trade and economic cooperation.

While matters pertaining to the establishment of an air link between Pakistan and Kazakhstan were reviewed, both sides agreed that visa restrictions should be eased on either side in order to facilitate traders.

Prior to the delegation-level talks, PM Nawaz and President Nursultan Nazarbayev held one-on-one talks, during which a range of issues came under review in order to enhance bilateral ties.

“Pakistan wants strong economic and trade cooperation with Kazakhstan,” the premier was quoted as saying.

Commenting on increasing the volume of trade from both ends, the premier said that “Pakistan gives high importance to its relations with Kazakhstan.”

Concluding talks, the Kazak president said the country valued its relations with Pakistan.

“The lack of infrastructure is a hurdle in improvement of relations between the two countries,” he said but appreciated Pakistan’s policies which resulted in economic stability.

US CENTCOM commander appreciates Pakistan’s sacrifices in war on terror