More people on airplanes right now than taxpayers in Pakistan

More people on airplanes right now than taxpayers in Pakistan 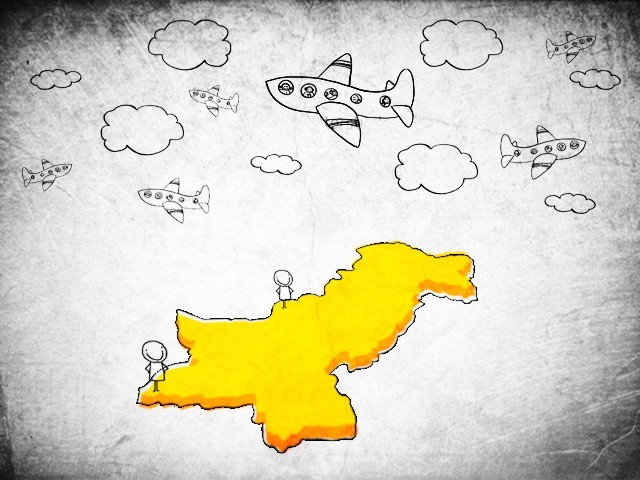 Only 0.3% of Pakistanis, or a mere 500,000 individuals, pay direct tax, according to a report by advocacy group Research and Advocacy for the Advancement of Allied Reforms (RAFTAAR).

In other words, there are more people on airplanes around the world at any given moment than there are Pakistanis who pay direct tax. (Direct taxes are taxes paid directly to a tax imposing authority, e.g. income tax.) In contrast, roughly 32 million, or 3%, Indians pay direct tax, even though they have a larger proportion of their population in poverty. The report found that while overall state expenditure has steadily risen, Pakistan’s tax revenue collection has remained flat for most of last decade. With a tax-to-GDP ratio of 9.4%, Pakistan falls close to the bottom in the ranking of countries on the basis of revenue collection.

The main causes of this low ranking, the report says, are a narrow tax base, with only about 10% of those employed paying tax, and a skewed tax structure, with 68% of the tax revenue being generated from indirect taxes. (Indirect taxes work by increasing the price of goods and services, e.g. sales tax.) Other reasons cited in the report are an inefficient tax administration, a complex and non-transparent tax system, corruption and tax evasion, and a non-supportive political environment.

Naturally, there is a budget deficit because we are not collecting enough taxes. This deficit is funded by expensive borrowing. Interestingly, only a third of our debt is now from foreign sources, i.e. two-thirds of national debt is money we owe to financiers within Pakistan. And they happen to be the expensive ones, with an average interest rate of 10.7%, compared to 1.9% for the overall foreign debt that we have. While foreign debt is cheaper, access to it is limited. The interest on our debt is Rs1.3 trillion, of which 92% goes to domestic creditors, and only 8% to international lenders.

The country’s public debt has reached Rs17 trillion, a significant increase from Rs6.3 trillion as of 2008, the report said, adding that the trend would continue unless the state increases its revenues. Pakistan’s economy is fiscally fragile because there is inadequate revenue, it said. “Any state that doesn’t collect enough taxes is unsustainable.”

The government pays almost half, 44% to be exact, of its revenue to debt servicing, which leaves little space for development, finds the research. For example, interest paid per capita (Rs6,684) in the country far exceeds per person health expenditure (Rs1,009), it says. More than 53% of our government’s expenditure is on interest payments on debt, defence and remuneration of government employees. Another 29% is allocated for subsidies and grants, for example, in electricity and oil. Both these categories of government expenditure are unlikely to decrease in the short run.

As a result, there is not enough funding for public good and services, i.e. inadequate infrastructure is holding back our economic growth. According to a World Bank report from 2013, Pakistan’s per capita GDP has the potential to grow 3.7% only with improvement in quality of infrastructure.

Pakistan’s development expenditure has declined from 7% to 2.5% of GDP, it said, suggesting an increase in tax revenues could reverse this trend. In spite of only 0.3% filing income tax returns, people feel they are taxed a lot. The report argues that this is because the government has resorted to indirect taxation. Pakistanis pay more for fuel and electricity than other countries in the region because of the surcharges added. The problem with indirect taxes, like sales tax, is that it penalises low-income groups more than high-income.

Better tax collection will pay for itself, the report argues, and that Pakistan’s fiscal fragility will worsen if the taxation crisis is not addressed.

The study also includes a public perception survey of the government’s taxation policy and looks into why people don’t pay taxes in Pakistan — only 900,000 file their income tax returns and 400,000 of those declare nil returns, putting the country’s tax to GDP ratio (9.4%) close to the countries in the bottom list in terms of revenue generation, according to the report.

Lack of trust on state institutions and fear that money collected will be misused are some of the reasons, the survey finds. However, it says there is also a severe information deficit where the social contract between citizen and state and the role of taxation in that regard is not well understood.

Despite an appallingly low number of tax filers, people feel they are taxed a lot, the survey finds. This is partly because the government is unable to collect direct taxes and resorts to indirect taxation, which is 68% of total tax revenue.

Pakistan needs to implant taxation into its education system in order to create compliant taxpayers in the next generation, the report proposed, adding that the state also needs to explain how it delivers services to the people and simplify the system of filing tax returns.