Bollywood divas rise to the occasion

Bollywood divas rise to the occasion 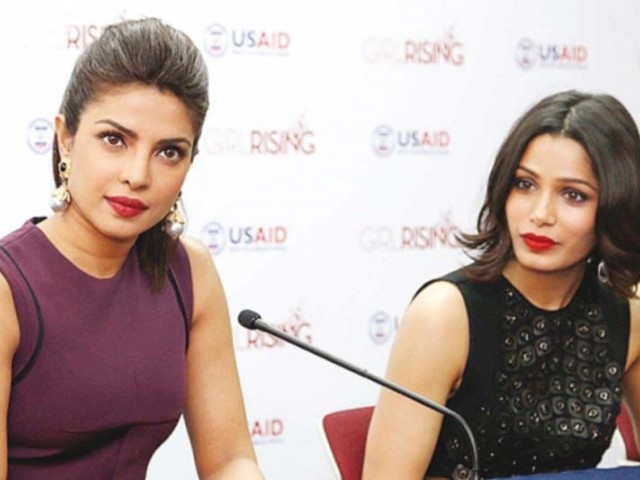 Priyanka and Freida, who have produced the film, speak at the launch of ‘Girl Rising India’ campaign in Los Angeles. PHOTOS: FILE

MUMBAI: Nandita Das, Madhuri Dixit, Sushmita Sen, Alia Bhatt, Parineeti Chopra and Kareena Kapoor are to feature in the film Girl Rising —  Woh Padhegi, Woh Udegi, produced by Priyanka Chopra and Freida Pinto. Priyanka and Freida, who are also brand ambassadors of the initiative, will star in the movie as well.

Megastar Amitabh Bachchan has contributed to the film with his narration. The Hindi version of the film is set to air on Star Plus on August 29. The movie is a collaborative project between the government’s Beti Bachao Beti Padhao campaign and Star TV. It will also be released on digital platforms in both Hindi and English.

“Woh Padegi, Woh Udegi … it’s what I’ve truly believed in and is the motto shared by each one of the amazing women, who have joined me on this journey for Girl Rising,” said Priyanka. “We’ve all come together to narrate real-life stories that highlight the amazing, positive impact that education can have on young girls. We believe that storytelling is a powerful way to inspire people and also to empower them to take action,” she added.

Frieda said “[This is a movement] that’s crucial in changing the way we perceive the role of girls and raise boys in our country.  “As a producer of Girl Rising India, I was very honoured to meet Prime Minister Narendra Modi in June to talk about Girl Rising and he not only embraced the idea but also suggested that we launch it on Raksha Bandhan,” she added.

Read: Priyanka Chopra is on ‘Twitter’s 100 Most Powerful Women’ list

Union Women and Child Development minister Maneka Gandhi said she was “very happy” about the collaboration between the ministry’s Beti Bachao Beti Padhao campaign and Girl Rising. “The child sex ratio in India is a matter of concern for all of us. Time has come to initiate more interventions and consolidate our efforts to secure the future of our girls,” she noted.

Star India CEO Uday Shankar said, “Star Plus will be presenting Girl Rising — Woh Padegi, Woh Udegi, a ground-breaking film designed to inspire a billion imaginations. We believe that the happiness of a nation depends on how we treat our daughters.”

The film in English, directed by Academy-Award nominee Richard E Robbins, had released in 2013 and showcases the stories of eight resilient girls from different countries, who battled obstacles to achieve their dreams.