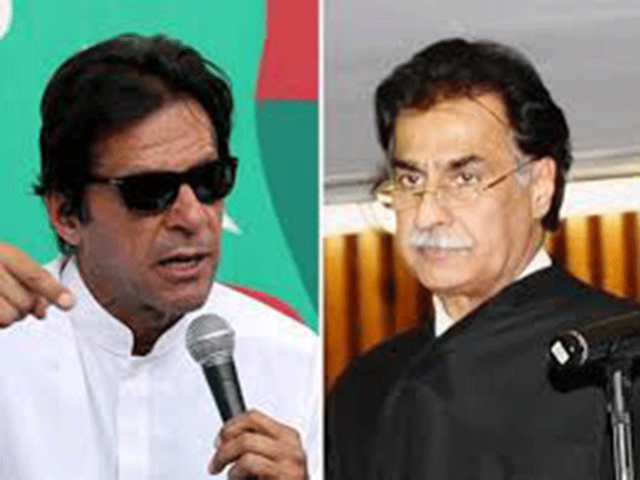 LAHORE: After hours of delay, an election tribunal finally announced its verdict on Saturday, approving chairman PTI’s claims that systematic rigging had taken place in the NA-122 and PP-147 constituencies and announced a re-election.

Later on, Sardar Ayaz Sadiq said that he accepts the tribunal’s judgment, adding that the tribunal had put the blame on election machinery.

“I respect the judgment and accept it but due to our reservations we will go to the Supreme Court,” he said.

He also said that the judgment was not about victory or defeat as he had also won the election in 2002.

Sardar Ayaz Sadiq further said that MQM leaders’ resignations will now be taken by the Deputy Speaker Assembly after the tribunal judgment.

Commenting on the tribunal’s verdict, Prime Minister Nawaz Sharif hinted that the Pakistan Muslim League-Nawaz (PML-N) will back Sadiq’s appeal in the Supreme Court, stating that they will avail their legal rights.

The premier said that the tribunal and its decision was part of the legal process which should be respected by all parties.

Meanwhile, Sardar Ayaz Sadiq’s son Ali Ayaz Sadiq said that there was no mention of “rigging” in the tribunal’s report. He hinted that his father may appeal the verdict in Supreme Court.

Sadiq’s lawyer too contended that contrary to what PTI chairman Imran Khan was claiming, the verdict did not rule that rigging took place in NA-122.

He added that the judicial commission, which had probed the general elections, too had held the ECP responsible for mismanagement in polls. The PTI chief said that he had written a letter to the poll body about the issue, warning that if it was not answered within two weeks, his party would stage a sit-in at the ECP’s office.

Imran said that he did not mean to upset Sadiq, but his objective was to mend the faulty electoral system.

Policemen struggle to place a barrier as political activists engage in a scuffle ahead of the tribunal’s verdict on August 22, 2015. PHOTO: PPI

Earlier, security around the Election Commission office was tightened and roads towards the commission sealed. Entry of any unauthorised person was also prohibited.

Sadiq had defeated PTI chief in the NA-122 constituency after which a complaint was filed in the Election Commission, alleging massive rigging in favour of Sadiq.

Several PTI and Pakistan Muslim League-Nawaz (PML-N) workers were injured in a clash with the police outside the Election Commission office as they waited for the result to be announced.

According to reports, party workers became violent and removed the barriers set up by the police outside the main entrance to the office.

Commenting on this situation, PTI leader Naeemul Haque said they will hold the province’s administration and police responsible in case of any untoward incident outside the tribunal’s building.

Political workers chant slogans as they wait for the verdict to be announced outside the tribunal’s building in Lahore on August 22, 2015. PHOTO: PPI

“Such inadequate arrangements have been made to counter the situation and maintain law and order,” he said while talking to Express News.

A special anti riot force was also deployed to avert any untoward situation.

While the speech focused on electoral training of workers, Imran said he was ready to accept any decision that the tribunal announced.

On August 17, Judge Kazim Ali Malik–who has been hearing the case– had reserved the verdict for August 22.

Further, while concluding his arguments, Anees Ali Hashmi, counsel for Khan, told the judge that nearly 45,000 invalid votes had been polled in the constituency. He said wrong national identity card (CNIC) numbers had been found on a large number of ballot counterfoils; some digits were found missing on many more counterfoils.

Hashmi said verification of counterfoils by the National Database and Registration Authority (NADRA) and the report of an inquiry commission suggested that the Election Commission’s record was not accurate.

He said the vote counting process had not been correct. The number of votes counted by presiding officers was different from that counted by the inquiry commission.