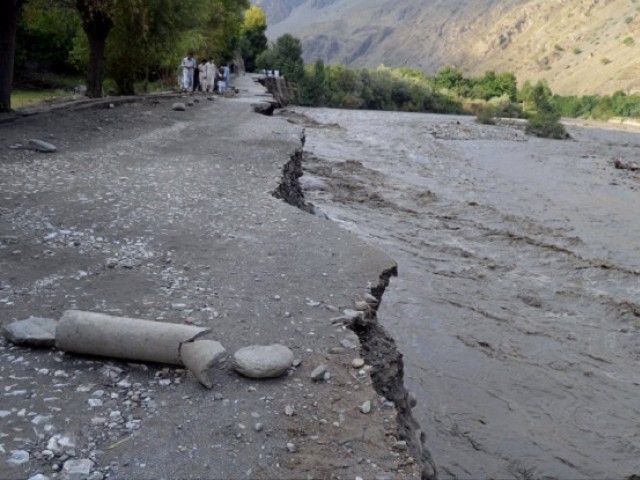 Pakistan Meteorological Department (PMD) on Friday issued fresh warning for Gilgit-Baltistan and Chitral, where flash floods are expected in the next three to four days.

Talking to The Express Tribune, the PMD Director General Dr Ghulam Rasul said there are chances that the air temperature in Gilgit-Baltistan and Chitral will increase by 2-4 degree centigrade followed by light to moderate rains which could melt the glaciers.

He said it is expected that the fast-melting glaciers would generate flash flooding in the nullahs and rivers and cause as much destruction as witnessed during the early monsoon. “The areas near nullahs and rivers should be evacuated soon in order to avoid maximum damages,” he said.

Meanwhile, Chitral’s DCO Aminul Haq told The Express Tribune that they have received fresh warnings of flood and almost all the areas near the nullahs and rivers have been evacuated.

He said during the recent flooding nearly 35 people were killed, eight sustained injuries, over 1,000 houses were damaged and 350,000 people were affected.

“[Therefore] the local and district government is focused on the reconstruction of the areas that have been badly affected and for that every department has sent its estimate to the provincial government,” he said.

“We know that currently the Khyber-Pakhtunkhwa (K-P) government is short of funds to compensate the flood affectees and it is impossible for it to give funds for the reconstruction of the infrastructure,” he said.

Haq claimed that so far they had not received any kind of financial aid from the provincial government for rehabilitation and reconstruction.

National Health Emergency Preparedness and Response Network (NHEPRN) Operations Deputy Director Dr Sabina Durrani said they had not received any kind of request from the Chitral and G-B local governments.

“We are, however, fully aware of the current situation and the challenges they are facing,” she said. Considering the gravity of the situation in which they are also left with limited stock of medicines, the NHEPRN has on its own requested the support of its partner agencies and NGOs, she said.

According to the NDMA, floods during the current season have so far claimed 216 lives across Pakistan.