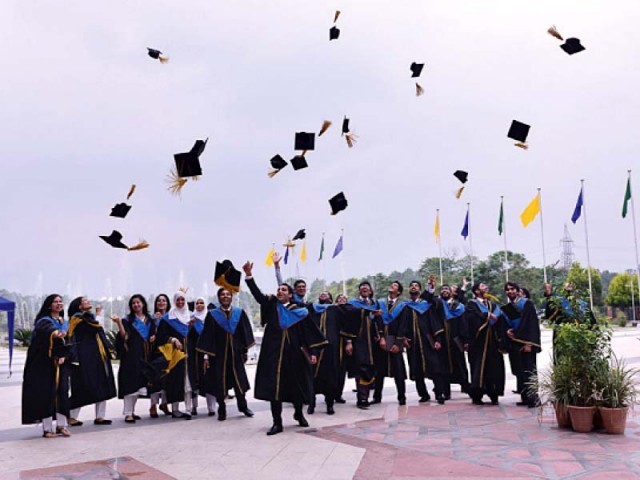 Students celebrate at their graduation ceremony at the IST. PHOTO: EXPRESS

The Institute of Space Technology (IST) celebrated its 10th commencement of class with the graduation of 152 students in the disciplines of aerospace, electrical and material science and engineering on Thursday.

President Mamnoon Hussain, who is also chancellor the university, was chief guest, said a press release.

While addressing the gathering, the president appreciated the efforts by the institute towards achieving academic excellence, adding it was the first university to focus on the applications of space research in a variety of areas while endeavouring to bring the nation at par with the international community.

He appreciated IST for working on projects of international significance like the ‘silk road project’ of the National Astronomical Observatories, Chinese Academy of Sciences, funded by National Aeronautics and Space Administration (NASA) and International Centre for Integrated Mountain Development (ICIMOD), as well as the internationally funded International Foundation for Science (IFS) project.

He was impressed by the innovative and research-based projects of IST, which are being set as benchmarks.

He especially lauded the launching of the Geo-Spatial Research and Education Lab, an open-source for remote sensing and geo-informatics.

The chancellor conferred students with masters and baccalaureate degrees, and gave the President of Pakistan gold medals to Hafiz Zeeshan Iqbal Khan for aerospace engineering, Muhammad Abdullah Iqbal for electrical engineering, and Sajidullah Khan for materials science and engineering. The three students stood first in their respective programs.

The vice-chancellor’s medals for best final year projects were awarded to Hafiz Zeeshan Iqbal Khan and Arsalan Ahmad for aerospace engineering, to Muhammad Abdullah Iqbal and Usama Islam for electrical engineering, and to Junailur Rehman for materials science and engineering.

Projects by graduating students were also shown to the gathering.

Though a young institute, IST is ranked amongst the top engineering universities in the nation, the release said.