Takes people around the city, helps them unders­tand the histor­y and cultur­e of the garris­on
By Hafsah Sarfaraz
Published: August 18, 2015
Tweet Email 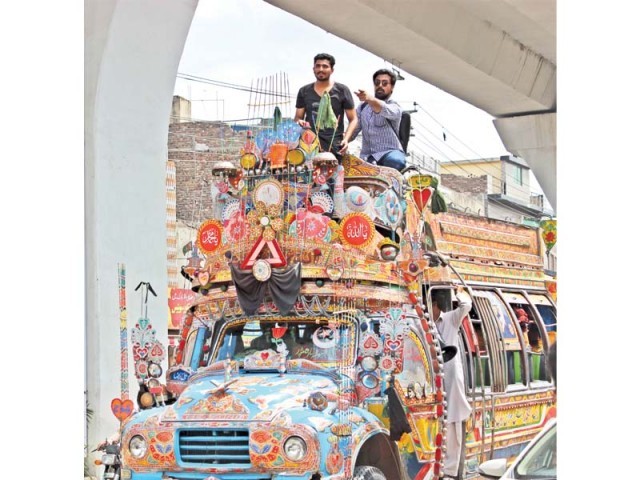 Guided bus tours are not a new phenomenon, however, the SSE aims to make it not just a tour but also an entirely different and memorable experience. PHOTO: EXPRESS

ISLAMABAD: Bus tours are extremely popular across the world. Visit any city in the world with a few tourist attractions and you are bound to come across a big bus tour or a hop on hop off city sightseeing bus. So, it was not a surprise when some bright individuals from Pakistan initiated the Super Savari Express (SSE). It is a guided bus tour that takes people around the city to give a tour of its highlights and helps them dwell in the history and culture as well.

Initiated in Karachi and Lahore, the SSE started its tours in Rawalpindi and Islamabad recently. “The response has been great in the twin cities,” mentioned SSE Operations Manager (North) Umar Saeed Khattak.

When asked about the target market, he told The Express Tribune that it mainly constitutes of educated locals. “We do get a lot of tourists and young people as well, which is helping us create a chain of empowered youth around the country,” Khattak said. Most of the tour guides are also young students and individuals who are passionate about travel, tourism, art and culture.

Guided bus tours are not a new phenomenon, however, the SSE aims to make it not just a tour but also an entirely different and memorable experience for everyone on the bus.

The SSE ensures that the locals get to overview its highlights along with a hidden side that they were unaware of, prior to the tour.“We do not disclose our sites because of security issues but we cover much more than the basic and must attractions of the twin cities,” he said while discussing the itinerary of the tour.

In Rawalpindi, from Jamia Masjid, known as the Blue Mosque of the city to Lal Haveli, SSE covers it all. It also takes its crew to bazaars and gives them a taste of the best street food the city has to offer. In Islamabad, the tour becomes even more interesting because of the rich history and culture of the city.

“As the tour ends, we entertain our people with an interactive discussion session so we can get to know about areas where we are lacking and those which need to be improved. It is followed up by a musical session, to end the tour on a more entertaining note,” he further added.

The ideology behind the SSE is to soften the image of Pakistan internationally, and the fact that BBC, Washington Post and other internationally acclaimed publications have covered it, is a testament to the fact. It also aims to promote local tourism and educate the locals about thousands of years old history, while giving something back to Pakistan.

‘Highest civil award will be sought for Khanzada’