What is possib­le is the minimi­sing of these losses. This can happen if we learn from our experi­ences of the past
By Nasir Jamal Khattak
Published: August 18, 2015
Tweet Email 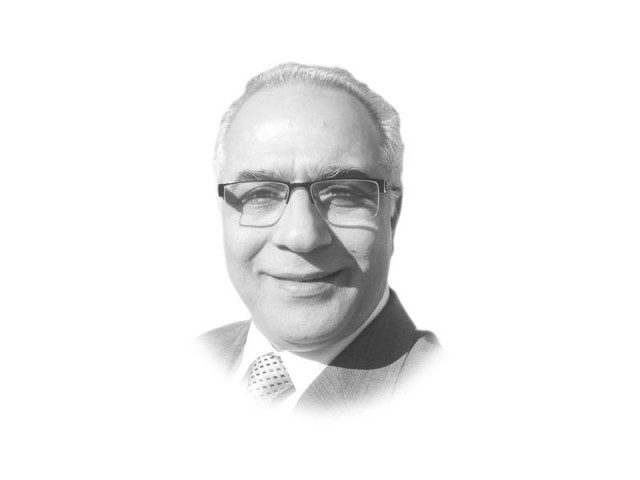 The writer is a professor at the University of Peshawar

Floods, once again, have caused human and material losses in many parts of the country. This is not the first time, and from the way things stand, certainly not the last time something like this will occur. Wishes and prayers alone will not get us anywhere. We need to have a serious plan in place if we mean to save our people and property from such calamities. We are unable to break free of the vicious cycle that repeats itself religiously almost every year.

We as a nation have interesting ways of dealing with these, largely self-imposed natural disasters. Photo shoots and relief camps here and there, rescue operations by the military, and an aerial survey of inundated areas. As the flood water subsides, media coverage wanes as well. And next time, the same cycle repeats itself. Despite the fact that floods wash away roads, bridges, houses, electricity lines — infrastructure that costs billions — there is no visible resolve to do something concrete that could minimise the damage. There is no analysis of where the planning and strategies to prevent such calamities went wrong. The infrastructure is repaired and restored to exactly the same standards that were unable to withstand destruction in the first place. It appears that our planners lack vision and imagination.

If glacial melting is a reason for the plight we are in, and it might as well be, we need to realise that ours is not the only country under such a threat. Climate change is not specific to Pakistan. And although this factor, along with others, aggravates the damage done by floods, it still doesn’t explain how those bridges and roads that outdate Pakistan itself withstand the ravages of time, of successive floods and of landslides. Were those planners and engineers so good that they anticipated all of these factors? Did they design and construct things differently? The construction material and machinery were certainly not as developed as they are now. And the science of engineering wasn’t as advanced either then as it is now. What did they do right, which our present-day planners are missing?

While one may attribute losses in private property to sub-standard quality construction material, or poor design, there appears to be no logical explanation for the destruction of bridges and roads for which the state allegedly conducts feasibility reports. One may argue that ours is a poor country that cannot afford to spend the kind of funds needed to build flood-proof infrastructure. But then the successive repairs, in some cases reconstruction from scratch, should do the trick. We are being penny wise and pound foolish. Under the pretext of opting for the lowest bidder, we end up compromising on quality of these infrastructure projects.

While it is easy to blame nature for all the devastation, it might not be inapt to say that our planners, authorities, engineers, the construction material used, and the quality control mechanisms in place are all lacklustre. Planning and designing without considering how and why the previous floods played havoc is a futile exercise. While it is not possible to tame nature, we need to realise that if we don’t start planning better, floods will continue to cause more destruction.

I shudder at the thought of the consequences of a dam bursting due to ill-planning, poor design, and low quality. Then, as now, some of us will still insist on looking for some invisible hand to blame. In our efforts to look for them, we fail to see ours, which is certainly involved in some of the problems facing us today. Our planners do not plan to fail; they simply fail to plan well. There is nothing wrong with being wrong so long as we learn from our mistakes. Coming up with a strategy after thorough assessment of past experiences, calculated and scientific anticipation of future challenges, and knowledge of the resources available today, is what we need.

There will always be one or another natural or not-such-a-natural calamity that will hit us. And there will always be material and human losses. It is not possible to avoid them completely.  What is possible is the minimising of these losses. This can happen if we learn from our experiences of the past. Our present conduct indicates that we simply do not have the capacity to learn from them. I believe we do; we just need that moment of inspiration that will lead to a movement that focuses on building what can withstand the ravages of time and floods. Let’s not construct to reconstruct the same anymore. Instead of perceiving floods and earthquakes as punishments for our bad deeds, let’s consider these a wake-up call from nature.

The attack on Shuja Khanzada