All they want is a school

All they want is a school

The recent floods inunda­ted almost every struct­ure that stood in the villag­e, sparin­g just the mosque­
By Sarfaraz Memon
Published: August 17, 2015
Tweet Email 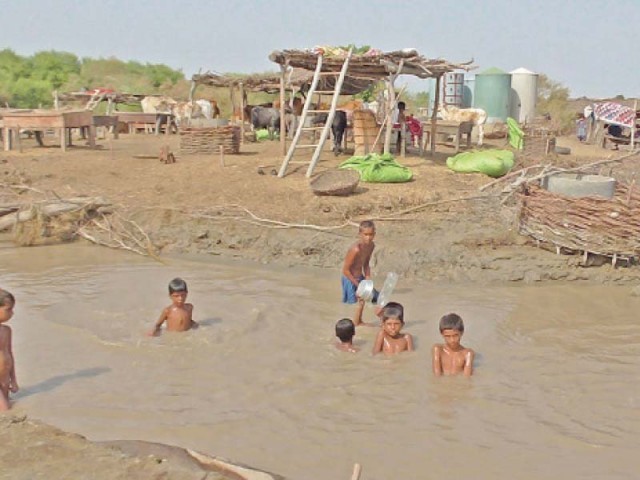 Nearly all the houses of the Abdul Ghani Chachar village have been razed to the ground in the recent floods. A mosque built by an NGO is the only structure saved from the mighty flood’s wrath. Meanwhile, the residents of the village, who have enough grain in stock for sustenance, ask only for a school for their children. PHOTOS: EXPRESS

The mighty Indus razed almost all their houses to the ground, leaving the residents of the Abdul Ghani Chachar village in abject misery. Yet all they ask for is a school for their children.

The recent floods inundated almost every structure that stood in the village, situated within the Shank Bund near Ghotki, sparing just the mosque, which stood resilient amid the gushing water. Despite losing nearly everything they owned, all they want now is a primary school for their children.

In the katcha [riverine] areas from Pano Akil to Ghotki, most of the villages have been submerged in water, due to which, houses have collapsed. The villagers have moved to higher ground to safeguard their valuables, particularly livestock. Haji Muhammad Siddiq Chachar, whose father Abdul Ghani Chachar had established the village more than three decades ago, told The Express Tribune about the damages caused by the flood. Pointing towards the houses razed to the ground, he spoke about how the villagers had gathered their valuables, including huge iron boxes and stocks of grain, and set up a temporary platform made of bamboo and wooden planks to keep them safe from the water. Speaking about the resilient mosque, Haji said that it was built by a non-governmental organisation (NGO), whose name he did not remember. According to him, it was a noble deed on the NGO’s part as the children of the village could then learn to read the Quran at the mosque. “So far, eight children have memorised the Quran by heart,” he said.

Haji has never been to school and deeply regrets it. He wants the children of his village to get at least primary-level education. “We have requested the authorities to establish a primary school in the village several times but all in vain,” he said. “Without education, we are nothing. It is an embarrassing situation when we receive an invitation card for a wedding and, being illiterate, we cannot read it. We have to go to the protective embankment to ask somebody to read it for us.” According to Haji, nobody has visited their village for relief. “But we are not worried about the relief or tents,” he said. “What we are worried about is the future of our children, which looks bleak without education.” When asked what they wanted the most, some children of the village who were taking a dip in the river water, replied “School!” in chorus. “In the mosque, we are only reading and memorising the Quran,” said one of them. “But we want a school to get academic education to secure our future. We hope that saeen Qaim Ali Shah will fulfil our just demand and provide us with a school.”

Read: Over a million people affected by floods in Pakistan: NDMA

A villager, Dilbar Chachar, told The Express Tribune that the villagers have enough stock of grain to survive. Accusing the district administration of ineptitude, he said that few people from the katcha areas have moved to safer places, while a large number of people from the pucca areas have moved to the relief camps set up by the government and are being taken care of.

Speaking about the damages brought to the village by the flood, he said that the flood brought tons of sand with it this year, which has ruined the land. “Therefore, it is next to impossible for us to sow wheat this season.”