Party leader­s claim the issue should be viewed from a human perspe­ctive
By Our Correspondent
Published: August 17, 2015
Tweet Email 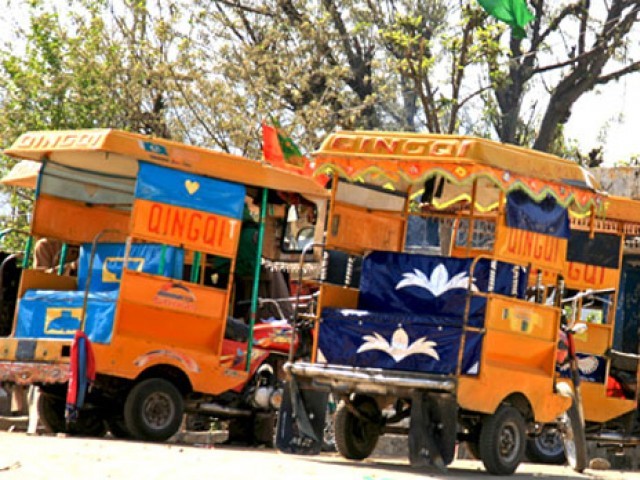 Party leaders claim the issue should be viewed from a human perspective. PHOTO: epakistannews

KARACHI: Jamaat-e-Islami (JI) has announced their intention to stage a sit-in against the ban on Qingqis and CNG rickshaws outside Mazar-e-Quaid on August 18, as part of their struggle for the rights of the drivers.

Qingqis and CNG rickshaws, though un-regularised and without any route permits, had become an alternative transport source for the people of the city in the last decade, providing much needed competition for the long-running buses network, reasoned the party’s leaders. However, they were banned in August this year following the Sindh High Court’s decision, which decreed them unfit for the road.

Interpreting a different angle, the JI believes that the matter should be viewed as a human issue rather than a legal affair, due to the large number of people it concerns.

“It is not a legal case, but a human one. It is the case of hundreds of thousands of drivers who feed their families and of those who travel daily on [the rickshaws],” said JI Karachi’s Ameer Hafiz Naeemur Rehman, addressing a gathering at the party’s city headquarters.

The transport issue has remained a long-standing bone of contention between the authorities and the dwellers of the city, which is expanding with each passing day. Numerous transport schemes have been initiated by the government in the past to cater to the increasing needs of the city, but none of them were sufficed, nor did they continue. “If there will be no big buses, no circular trains, what will people rely on other than the Qingqis and CNG rickshaws?” questioned the JI leader, adding that the government should make arrangements and give some time to the three-wheelers to get registered.

Representatives of rickshaw associations also attended the meeting. An official of the Qingqis association questioned that if the motorcycle-head three-wheeler was illegal, how had it kept facilitating the people since 2000.

A leader of the CNG rickshaws association said that their vehicles had been fined a heavy sum of Rs10.58 million since the crackdown began.