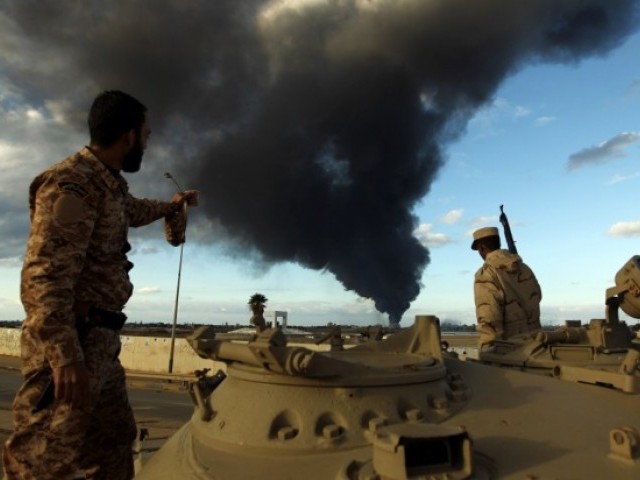 Cairo has launched airstrikes on IS weapons caches and training camps in Libya. PHOTO: AFP

TRIPOLI: Libya’s internationally recognised government has called on Arab countries to bomb Islamic State group targets in Sirte, after warnings of a “massacre” in the coastal city.

“We urge fellow Arab countries… to launch air strikes on Daesh terrorist group positions,” the government based in the country’s east said in a statement on its Facebook page on Saturday, using an Arabic acronym for IS.

The government also renewed its call for the UN Security Council to lift an arms embargo that it says is hampering its military’s battle against IS, which seized control of Sirte in June.

Read: IS ‘beheads’ 12 in battle for Libya’s Sirte: media

Fighting for control of the city, the hometown of slain dictator Moamer Kadhafi 450 kilometres east of Tripoli, raged from Tuesday to Saturday, but Sunday was reported to be calm.

“There are no battles today,” an official at the Sirte local council told AFP by telephone.

“It’s calm. We don’t know what happened exactly, but some of the armed youth who fought IS left the areas of fighting and the city.

“They couldn’t get any real help from either government, so they had to stop fighting, or even withdraw from their city,” the official said.

Both of Libya’s rival governments — one based in the east and the other in Tripoli — have encouraged fighting against the jihadist group.

Read: In the lurch: Nearly 200 dead in Libya ‘massacre’

Authorities in Tripoli on Tuesday announced the launch of an operation to seize control of Sirte.

Libya’s ambassador to France, Chibani Abuhamoud, told AFP on Friday that fighting in Sirte had left between 150 and 200 dead, and warned of a “massacre” in the city.

The ambassador, who represents the internationally recognised government, said the clashes erupted after IS assassinated an imam, or Muslim prayer leader, from the influential Al-Farjan tribe at the start of the week.

IS militants beheaded 12 local militiamen who had been battling them in the east of the city and hung their bodies on crosses, official news agency LANA reported on Saturday.

On Friday, the Dar al-Iftaa Muslim organisation that issues religious decrees issued a statement calling on Libyans to mobilise against IS.

Libya has descended into chaos since the fall of Kadhafi in 2011, with two administrations and rival militias battling for control of the oil-rich country.