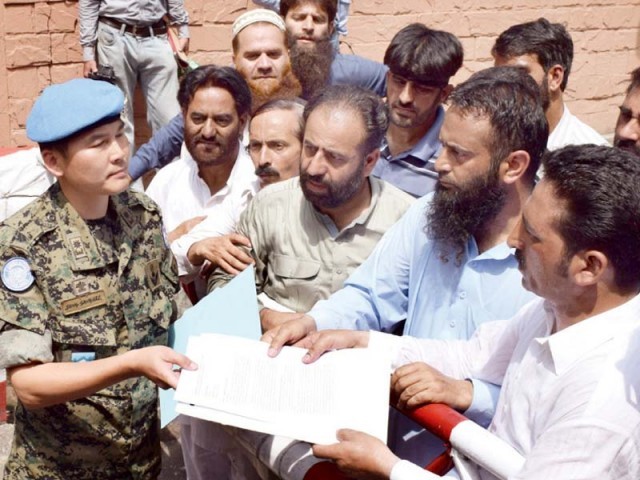 Hundreds of thousands of Kashmiris living on both sides of the Line of Control (LoC) and elsewhere in the world observed August 15, India’s Independence Day, as a black day to protest against Indian forces’ illegal occupation of their homeland.

A complete strike was observed in the disputed Himalayan region on the appeal of All Parties Hurriyat Conference (APHC) leaders Syed Ali Geelani and Mirwaiz Umar Farooq and other resistance leaders, including Muhammad Yasin Malik and Shabbir Ahmed Shah. All shops, businesses, educational institutions and courts remained closed while transport was off the road.

Indian authorities had imposed a curfew in the state capital Srinagar and stringent restrictions were placed over other towns by deploying heavy contingents of Indian police and troops to prevent people from holding anti-India demonstrations.

Security was beefed up around Bakhshi Stadium, the main venue of the official functions. The police had laid concertina wires and erected barricades on roads running parallel to the stadium. CCTV cameras were used for surveillance purpose. In their statements issued from Srinagar, the APHC leaders – who have been placed under house arrest or illegal detention – said India had no moral or legal justification to celebrate its Independence Day in Jammu and Kashmir as it had occupied the territory against the will of the Kashmiri people.

The Jammu and Kashmir Democratic Freedom Party (DFP) and the APHC thanked the people of Indian Kashmir for observing black day. The forum’s spokesman, Ayaz Akbar, said the complete shutdown on India’s Independence Day and hoisting of Pakistan’s flags on its Independence Day despite strict restrictions by the authorities should serve as an eye-opener for India and the international community.

“When India was celebrating its Independence Day, the people of Kashmir, by keeping themselves aloof from official functions, were giving a clear message to the world that they have never accepted Indian rule,” he said.

Shabbir Ahmad Shah asked New Delhi to read the writing on the wall and resolve the Kashmir dispute in accordance with the Kashmiris’ aspirations.  The APHC spokesman also thanked the people of occupied Kashmir for observing a complete strike on India’s Independence Day.

In Azad Jammu and Kashmir, anti-India rallies were staged and processions staged in all small and major cities, including capital Muzafferabad and all other nine district headquarters of Mirpur, Kotli, Bagh, Bhimbher, Palandri, Rawalakot, Haveili, Hattiyan Bala and Neelam valley by people belonging to all walks of life.

In Mirpur, the major protest rally was staged on the District Courts premises under the auspices of the National Events Organising Committee with the coordination of various public organisations representing people from all walks of life. People from all shades of public opinion were in attendance.

Carrying black banners, participants of the rally marched through major city streets to express severe indignation against Indian brutalities and human rights abuses in Indian Kashmir and in favour of Kashmiris’ right to self-determination.