Those who laid down their arms are our brothe­rs, says Lt Gen Nasir Janjua­
By Web Desk
Published: August 14, 2015
Tweet Email 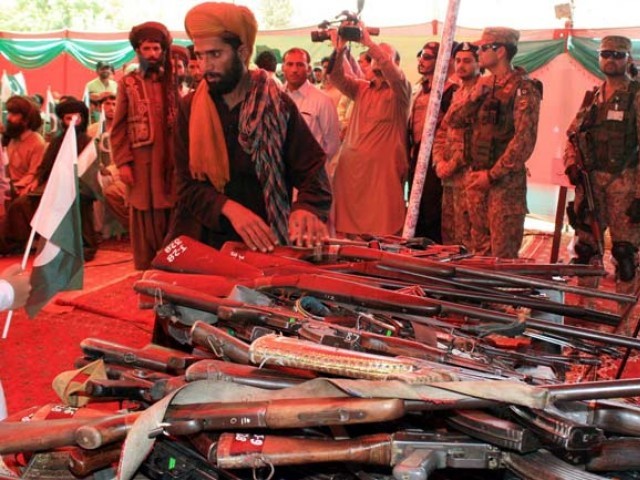 The fighters surrendered their weapons during an Independence Day ceremony at Police Lines in Quetta. PHOTO: INP

QUETTA: As many as 400 Baloch insurgents laid down arms and renounced violence on Independence Day, Radio Pakistan reported.

The fighters surrendered their weapons during an Independence Day ceremony at Police Lines in Quetta.

“Those who laid down their arms are their brothers and will be settled in their homes,” Commander Southern Command General Nasir Khan Janjua said, adding that all these people who laid down arms and renounced the way of violence are our friends, brothers and Pakistanis.”

Home Minister Balochistan Sarfaraz Bugti, IG Balochistan and other high civil and military officials were present at the occasion.

During the event, the insurgents came one by one on stage and laid down their arms, while vowing not to operate against the State again.

In last couple of moths, hundreds of fighters belonging to separatist Baloch militant groups have laid down their arms.

On June 26, the Balochistan Government extended a general amnesty for all militants, provided they lay down their arms.

Read: Amnesty for Baloch militants — will it work?

The provincial apex committee, during its meeting chaired by Chief Minister Dr Abdul Malik Baloch, reviewed the progress of the implementation of National Action Plan (NAP) in Balochistan.

It was agreed during the meeting that miscreants, criminals and anti-social elements, would be given no concession and action against them would continue, while in order to facilitate youngsters in renouncing violence and laying down their arms, the meeting agreed that a Peaceful Conciliatory Balochistan Policy would be implemented for the rehabilitation of those who surrendered.