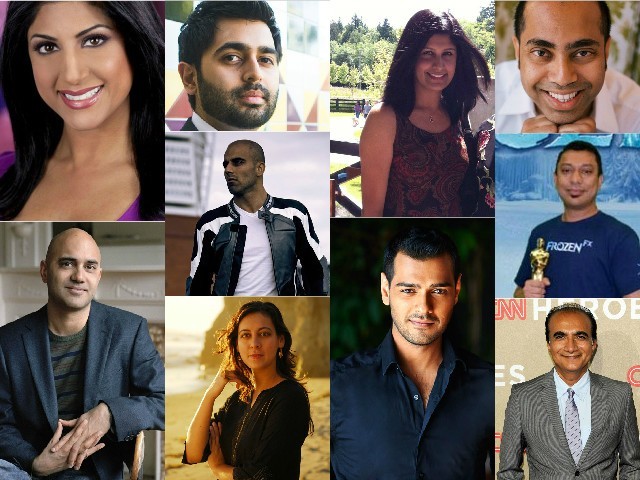 Here are 10 unsung Pakistani heroes making it big in Hollywood.

KARACHI: All of us know that the legendary singer and global icon Nusrat Fateh Ali Khan had composed music for Dead Man Walking, Bone Collector, and Last Temptation of Christ. And we also know that the youth icon Atif Aslam sang for Man Push Cart and The Reluctant Fundamentalist.

But do you know of Pakistanis other than Adnan Siddiqui, Faran Tahir and Sharmeen Obaid Chinoy who made it big in Hollywood? Chances are slim, we bring you 10 unsung heroes who are making Pakistanis across the world proud.

The news reporter in Philadelphia at KYW-TV, initially appeared on MTV’s Rachael Ray Show and Law & Order. She got her big break in 2011 by becoming a news anchor at CBS for the First Forecast Mornings show in Detroit station. She has also participated in a number of beauty pageants and was the 1st runner up in the Miss Pennsylvania USA pageant. The Karachi-born popular screenwriter, director and novelist has written and produced the NBC series Kings. Some of his other works include NBC’s Bionic Woman, The CW’s Nikita, Disney’s Tron: Uprising and Sleeper Cell — nominated for the Golden Globe and Emmy Awards in Best Miniseries category in 2005 and 2006. The actor is known as Principal Figgins in Fox series Glee. He has appeared in 58 episodes throughout the six seasons. He rose to fame after appearing in Friends and Nip/Tuck. He was featured in other famous shows including, The George Carlin Show, Married With Children, ER, Two And A Half Men, Seinfeld and Everybody Loves Raymond. He was also seen in Transformers: Dark of the Moon. The writer and actor is the proud recipient of 2013 Pulitzer Prize for Drama. He has written plays for the stage including Disgraced, The Invisible Hand and The Who and The What. He made his debut as a novelist with American Dervesh in 2012. If you have seen The Golden Compass, Spiderman 3, X Men: First Class and Life of Pi, you should feel proud to know that the visual effects were created by none other than a Pakistani specialist. The Oscar-winning visual effects specialist has also received an Academy Award in Best Visual Effects category for Frozen — making it a first for the Walt Disney Animation Studios. Some of his other works include The Day After Tomorrow, The Incredible Hulk and The Mummy. The credit of portraying Angelina Jolie as the picture-perfect villain in Malificent goes to none other than software engineer Novaira. She worked with her team to create inimitable special effects. She has also worked on other Hollywood films such as A Christmas Carol, Mars needs Moms, Thor, Transformers 3 and Jack the Giant Slayer. Syed Fuad Ahmed — now known as Gabe Grey — was born in Karachi. The 32-year-old actor was seen in The Haircut, One Last Shot and Bomb Girls: Facing the Enemy.  He has also attended the Model and Talent Search Canada in 2005. He will soon be seen in Deepa Mehta’s directorial Beeba Boys alongside Ali Kazmi. Umar got his big break by playing the lead role of Robert Martinez in Veracious Perception. He was also seen in the films Miami Heat, The Hitman, The Test, Deliver Us From Evil, Captain America: Civil War, The Hunger Games: Mockingjay and District Voices. The Lahore-born actor also possesses martial arts skills. The New York City-based filmmaker and author has written The Girl from Foreign: A Search for Shipwrecked Ancestors and Lost Loves. She has also produced the documentary The September Issue that featured the making of Vogue. It has won the Excellence in Cinematography Award at Sundance Film Festival in 2009. The screenwriter has written for some of the popular television series such as Aliens in America, Mr. Sunshine, Outsourced, Save Us, then the Whales and Emmy Award-winning series Modern Family. He has also won an award for his short film Equal Opportunity. Sameer is currently working on Fox’s Goodwin Games.