Sartaj Aziz to visit India for talks on August 23

Sartaj Aziz to visit India for talks on August 23 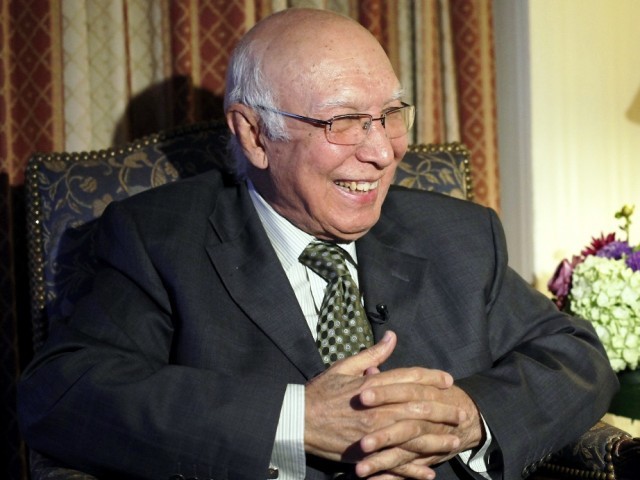 "I can confirm that I will be going to India on August 23," Sartaj Aziz. PHOTO: REUTERS

ISLAMABAD: Pakistan’s foreign policy chief will visit New Delhi for security talks on August 23, he said on Thursday, in the rivals’ first attempt in months to restart talks.

“I can confirm that I will be going to India on August 23,” Sartaj Aziz, adviser on foreign affairs to Prime Minister Nawaz Sharif, told a news conference.

Aziz said his visit was “not a breakthrough in terms of composite dialogue and all the issues but at least it is an ice breaking on some issues… and let’s hope it will lead to further more comprehensive dialogue on the other issues between the two countries”.

The two prime ministers had agreed to the step during their meeting in Russia, he added.

Earlier this month, Aziz said India had proposed August 23 and 24 as possible dates for the crucial meeting between Pakistan and India’s national security advisers.

The national security advisers’ meeting is part of the understanding reached between Prime Minister Nawaz Sharif and his Indian counterpart Narendra Modi on the sidelines of the Shanghai Cooperation Organisation summit held in Ufa, Russia in July.

The fate of the meeting has been hanging in the balance due to tensions between the two nuclear armed neighbors in the aftermath of the Gurdaspur attack. India claimed the three gunmen who went on a killing spree in the district came from Pakistan after crossing River Ravi which Pakistan dismissed.

Rejecting the Indian accusations, the Foreign Office (FO) warned that such ‘provocative’ accusations by India were a threat to peace and security in the region.

“Pakistan regrets the unsubstantiated and unwarranted assertion that those involved in the Gurdaspur incident of July 27 entered India from Pakistan,” FO spokesperson Qazi Khalilullah said in a statement issued in response. “Pakistan believes that the [Indian] home minister’s provocative comments are a threat to peace and security in the region,” he warned.