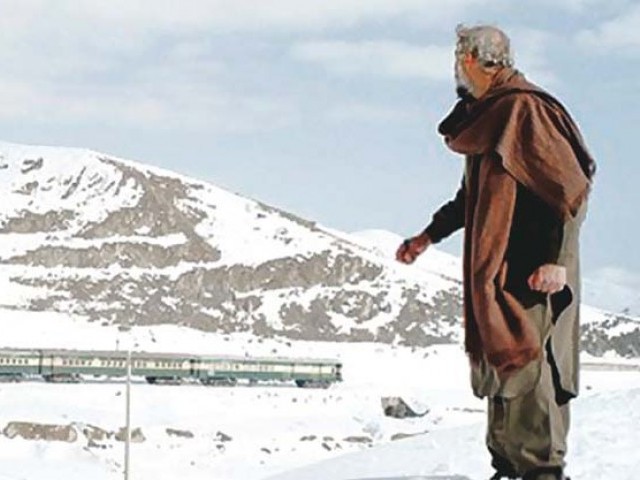 Celebrated Pakistani photographer Kohi Marri once said, “Such is the beauty of the landscape of Balochistan that we can shoot an entire Lord of the Rings here”.  Though Jami was not present when we discussed it, but maybe he was, in another dimension.  And the visual magnum opus that Moor has turned out to be is more or less, the culmination of Marri’s account. The only difference is that Frodo Baggins was aided by the fellowship and Wahidullah Khan (Hameed Sheikh) only has a fragile family by his side.

Wahidullah, the station master of Khost railway station reluctantly agrees to sell off the railway infrastructure due to political pressure and promised financial benefits. But as his son Ahsanullah Khan (Shaz Khan) moves to Karachi,  he finds himself entwined in the dilemma of not letting go of what is inherently his (the railways) and embracing the hope of a better tomorrow. The simple yet thoughtful execution of this conflict makes it dark-to-the-core but apparently an ethereally white story — a dense emotional experience. The rest of the film is an engaging collection of non-linear sub-plots that meet for a definite purpose while enticing you with enough twists and turns to keep you fastened to your seats.  Surprise! You have the first ever complete Pakistani film of the year.

It was evident from the baffled response to Operation 021 that Jami has a habit of over-complicating things. He does not refrain from that in Moor — as a result, it might take you some time and talking to  fellow cinemagoers to decipher the connection of subsequent deaths in the first half. And those deaths are significant theme elements, as well as imperative to the plot detail, so a little clarity would have helped convey the foundation of the film.

However, the deep understanding of the social issue, coupled by powerful performances make up for the complications as the film progresses. Hameed Sheikh‘s journey from complete sanity to neurosis is not only reflected through his swift aging post-crises, but also the subtle brilliance with which his mannerisms become more timid with time.

Shaz Khan adapts the Pushtoon accent fluently and effortlessly while maintaining his composure —almost comparable to a dead volcano — whenever he did erupt on screen, you knew from within all your being that he means business.  Abdul Qadir as Baggu Baba turns out to be the highlight of the film.

Bagoo generally preserves a very goofy attitude towards things but doesn’t let the viewer confuse him for a clown. He, in many ways represents the true essence of a native, one who would kill or get killed for his soil. The most exceptional part of Qadir’s portrayal of Bagoo is that he actually serves as the moral compass of the story but never asserts it. Kudos to Jami for crafting such unique characters and more so, directing them in a way that they get their fair share of impact.

Stylistically speaking, there are plenty of beauty shots in the film — offering the Pushtoon belt of Balochistan as a possible tourist spot for the rest of the world. But the shots do get a tad more claustrophobic in the interior scenes of Muslim Baagh. It could have been intentional, but a little more breathing space would have emphasised the attention-to-detail in the art direction.

The soundtrack of the film when listened to in isolation seems something out of the Strings’ Coke Studio but provides a spine-chilling experience when teamed with snowcapped mountains. Gul Bashri by Rahim Shah in particular, hits you like a cold breeze cuts through your muffler on a dark winter night — it’s haunting but hopeful. The often wall-to-wall use of the score, however, does get a bit vexing at times.

All in all, Jami manages to pull off the impossible with Moor. He grants us a true Pakistani film sans being pretentious or preachy and makes the much rural and suburban concept of ‘love for your motherland’ moving for urban audiences. This breathtaking emotional journey not only highlights the lost livelihood in Balochistan but also gives us hope that Pakistani cinema will not only be taken as an extension of Bollywood. Way to go, team Moor!

Going green with the chaand sitare